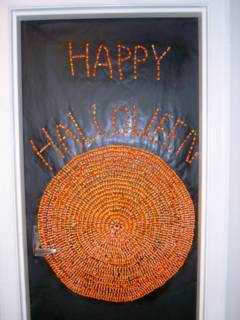 Behold our door in all of its glory. Thanks to matt and kat for the idea and combined effort. 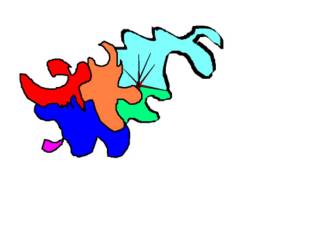 This one is called "When I was Bored."

Posted by Justin DLC at 3:11 PM No comments:

Email ThisBlogThis!Share to TwitterShare to FacebookShare to Pinterest
Labels: artwork

Today, I feel somewhat obligated to relay some information that many people who do not visit Fark regularly would likely miss. So,

Next, we have Barry M. Seltzer, the guy who claims “I was exercising my political expression,” when he drove his Cadillac "up the sidewalk directly at Harris and others before swerving and driving away".
Posted by Justin DLC at 1:30 PM No comments:

Email ThisBlogThis!Share to TwitterShare to FacebookShare to Pinterest
Labels: funny

It really amazes me that people can screw up the simplest things.

So, I work in a Psychology lab on campus, and I run experiments on students that need credit for their classes. I don't expect much from students in General Psychology (who comprise much of the subject pool), as they are usually freshmen and are still getting acquainted to college. But the system here for signing up and doing experiments is about as fool-proof as possible. Still, I get at least 6 people a week who 1) Do not know the name of the experiment they signed up for 2) Do not know what room their experiment is in, and/or 3) Do not know what time/day they signed up for. Most of these people aren't even doing my experiment, they just walk by the room, decide to enter, and ask me about dozens of other experiments that I didn't know existed. I mean, come on, you at least need to know what, where, and when your classes are... can't you just write down the information you need for the experiments???

As for the ones that manage to make it to our experiments on time, ... well they aren't the brightest bunch. Although I tell them the buttons they need to press are the ones with "Y and N" written on pieces of paper and taped onto the keyboard, and not the actual "y and n" buttons, and although they read the instructions, people still hit the wrong buttons, and subsequently contribute essentially no informative data for our experiments. Then, I tell them to keep hitting the space bar for this one experiment, because words come up one at a time (also in the written instructions), 40 minutes later, they come out, having let the computer program advance the words on its own, leaving us with no useful data, and getting me behind in scheduling.

And then there are the post-experimental forms. Don't even ask me about the forms.

AND, you can't tell me this is hard stuff to do, because I'm doing it. I'm also in General Psychology (tearing it up BTW), taking experiments (other than the one I'm running) and getting credit for it. So, there's no need to screw it up, guys. Seriously. ... That reminds me, I have to go to an experiment right now!
Posted by Justin DLC at 6:17 PM 1 comment:

I less than three Less Than Jake.

In other news, I saw Al Gore speak today at the courthouse here. I enjoyed the content and delivery of his speech much more than John Edwards' last sunday. He seemed determined, but not vengeful, which was a good move on his part. He used humor, effectively.

To provide a nice balance to this afternoon's speech, I'll be attending the showing of FarenHYPE 9/11 tonight at the student life building here. I will try to compare it and contrast it to Moore's documentary.
Posted by Justin DLC at 5:47 PM No comments:

"I wear black on the outside because black is what I feel on the inside" is most likely the worst Morrissey line ever.
Posted by Justin DLC at 7:54 PM 2 comments:

Nothing beats one-class Fridays with a cheap Hari Krishna-cooked lunch followed by the perfect afternoon nap and discovery that you haven't forgotten how to play scales on piano. And then, topping it off with a real fruit smoooooooooooothhhiiiiiiiiieeeeee.

Except, maybe, no-class Mondays with a Thai lunch followed by me winning the lottery.
Posted by Justin DLC at 3:53 PM No comments:

I opened windows media player today, and on the front page, it had a link to hear Jimmy Eat World's entire new CD. So, ... check that out. I searched for it on windowsmedia.com, but couldn't find the link.

However, this did prompt me to search for other full lengths available, and found Elliot Smith's "From a Basement on a Hill" (it was at this site, but it looks like a page they constantly change, so you can just search for artists on the mainpage).

I didn't know they did this nowadays. Oh, yeah, I found REM's newest release on myspace.com the other day. Interesting.

I was reading my Psychology book again today:

"Other sleepers, mostly children, experience night terrors. The person might sit up or walk around, talk incoherently, experience a doubling of heart and breathing rates, and appear terrified. The night-terror sufferer seldom wakes up fully during the episode and recalls little or nothing the next morning... As with sleepwalking, night terrors usually occur during the first few hours of Stage 4 [sleep]."

Stage 4 sleep occurs earlier in the night, usually after an hour of sleep, and occurs only 2-3 times during the sleep cycles in one night. They say about 5% of children have sleep disorders like night terrors, and that "After age 40, sleepwalking is rare."

"Some people remember the
Night Terror. Some don't... Agree with what they are saying and doing... DO NOT yell at them or tell them they are only dreaming as this seems to only upset them even more."

Ain't it the truth?

"Even more interesting is the fact that all of these sleep disorders often run in families."

Crap.
Posted by Justin DLC at 1:53 PM No comments:

Larger than life, you lie
Above our heads, catching our eyes.
On a couch, you recline.
Pillows fluffed, morals maligned;
Ego stuffed, morals defined.

Cold weather, you face
Sleet, rain, and snow,
Though none will dampen
Your radiant glow.

Two pieces you wear
On top and below,
But your skin and your scruples
Are both being sold.

Does your money keep you warm at night,
While your morals are off at work?
Does your paycheck justify your sight
On the billboard for the product you serve?
Posted by Justin DLC at 7:50 PM 1 comment:

Email ThisBlogThis!Share to TwitterShare to FacebookShare to Pinterest
Labels: my songs

Shatner Back in Action.

William Shatner has teamed up with Ben Folds to make his second musical album, Has Been. Weird.

I think the most surprising tidbit from this (for me) was that Shatner is 72 years old. Now, that's old. I would like to hear some of this, so someone get it and send me a copy.
Posted by Justin DLC at 2:35 AM 1 comment:

To add comments to my whimsical posts, click on the "#" sign below the post. (If I cared the slightest bit more I would try to find out how to add a direct "comment" link on the main page.)

(Did any of this make sense to anyone else?)
Posted by Justin DLC at 1:59 PM 1 comment:

Email ThisBlogThis!Share to TwitterShare to FacebookShare to Pinterest
Labels: blog

This article from today prompted me to look up a report I heard about from the CIA.

How do materials like these disappear and neither the United States nor Iraq has anything to say about it?

Secondly, from the above article again-

"President Bush... justified the war, in part, by saying that then-Iraqi leader Saddam Hussein was on the brink of developing a nuclear bomb that he might use against the United States or give to terrorists."

Bush then picks Charles Duelfer to launch a thorough investigation of Iraq's weapons programs, and he comes back with

"Saddam's primary goal from 1991 to 2003 was to have UN sanctions lifted, while maintaining the security of the Regime. He sought to balance the need to cooperate with UN inspections... with his intention to preserve Iraq's intellectual capital for WMD..."

"The 1991 Persian Gulf War and subsequent U.N. inspections destroyed Iraq's illicit weapons capability and, for the most part, Saddam Hussein did not try to rebuild it, according to an extensive report by the chief U.S. weapons inspector in Iraq that contradicts nearly every prewar assertion made by top administration officials about Iraq."

(That Washington Post article sometimes prompts for registration, so NY Times and CNN have similar articles.)

(Second Note, if one searches for "Charles Duelfer report" on google, then many articles will appear, and one may have access to them from there.)
Posted by Justin DLC at 6:05 PM No comments:

I considered writing a whiny, egotistical post about missing out on Less than Jake, Jurassic 5, Dave Matthews Band, Morrissey, and Cake in concert (... not at the same, over a short period of time), but I've decided to steer this in a positive direction.

New York City was wonderful, but not novel this time around. I went there for a week in the spring and was amazed by it. But, now, not so amazed. So many people. We managed to drop in on the Metropolitan Museum of Art (after quite a bit of walking) and it was fantastic. We saw students sitting around sketching different pieces of art, and visited various wings on Egyptian, Greco-Roman, European, and American art and sculptures. We got lost in there.

Saturday Night Live, the focus of our venture, was also entertaining and exciting. It was very strange to witness all the movements inbetween sketches, notice the small, small stages and workspace, and realize that this crew does this every week. Impressive. Various "camera tricks" create a sense of a spacious set and easily-flowing ideas, when in actuality, the microphones are about a foot above the actors, weekend update was set on the main stage (right in front of the band) and Tina Fey and that other chick were wearing jeans with those blazers, and everything was hectic during commercials. The SNL band was brilliant. Jeffrey, the tenor-saxophone player was amazing, and the band was well rehearsed and played a set before the show, and during all commercials. Queen Latifah was also great. I think my favorite moment was when she walked into that sketch with Martha Stewart in jail and just gave the funniest look into the camera. Hilarious!

All that traveling has left me kind of beat. Although I slept entirely through both flights (even through the safety demonstrations of the second flight), I think my body discovered that it's unnatural for someone to be 30,000 feet above ground, traveling hundreds of miles per hour. I don't think it likes staying up more than 24 hours at a time, either.
Posted by Justin DLC at 1:10 AM 1 comment:

Instead of buying lunch today, I bought a Talking Heads album, More Songs About Buildings and Food. Probably the best decision I've made all day.

I chose music over food because I thought I got the new Cake CD in the mail, but it turns out it was just the extra disc they send out for ordering it, with a few b-sides on it. Dank.
Posted by Justin DLC at 1:23 PM No comments:

"That other girl, she didn't mean anything to me!"
Posted by Justin DLC at 1:08 AM No comments: