I've checked out Citizen Kane from my local library three times now. But it wasn't until this past Sunday that I actually got around to watching it. 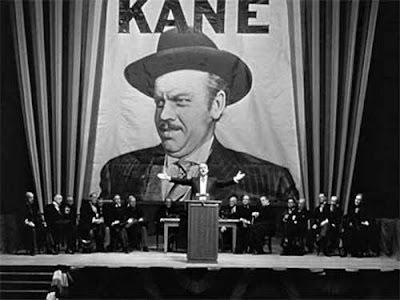 It's the epic story of America's most powerful man, Charles Foster Kane, who managed to burn through a sizable inheritance by pouring it all into his newspaper, The Inquirer. It edged out Casablanca and the grossly overrated The Godfather as AFI's top movie of all time.

Unfortunately, thanks to pop culture (and, specifically, The Simpsons), I've known the ending to Citizen Kane long before I knew anything else about the film. It's a shame, really, considering that it's a bit of a "surprise" (artificial? manufactured?) ending.

I can see why the movie was so highly rated, though. I didn't expect such beauty. Its cinematography easily rivals anything going on today (indeed, it's a lot more experimental than what I would have thought and what happens now -- a simple conversation in a room filmed from the floor's perspective?), and its sheer scope (and length) lend to its epic weight. It's a surprisingly lucid black and white film. Costumes and makeup (which was important since characters are shown at different ages) are very good, and the story is very good. The pacing and development, however, are a little off. It's a grand movie of a grand tale, but it's not absolutely perfect.

On a side note, which is really all they deserve, I also watched Chocolat and The Devil Wears Prada last week. ... Okay, for mindless entertainment, they actually weren't that bad.
Posted by Justin DLC at 3:31 PM No comments:

Email ThisBlogThis!Share to TwitterShare to FacebookShare to Pinterest
Labels: movies

I've got to keep up. Wilco's native son, drummer-musician/web designer/traveler Spencer Tweedy, has his own blog.

It's pretty high-brow for a 13-year-old. Actually, it's magnificent. He has a lot of great observations, and you can assume it's really him writing from the randomly placed 13-year-old-isms. For example, from his latest post, Heaps And Heaps Of Water:

What I nicknamed The Turd (pictured above), is said to have been an ancient fort and defensive position for the indigenous people of New Zealand.
Posted by Justin DLC at 11:15 AM No comments:

As I continue to struggle with a seemingly endless amount of options following the completion of my current degree (Ph.D. program?, job?, both?, which kinds?), I'm constantly consuming media in what I think is my extended window of opportunity for learning about other fields. (Which is not to say that I don't think I can learn about other things after I get a job, a career, or a specialty in academics. It is more of a personal belief I have based on things I learned so far that I don't want to take the time to explain at this moment. So there.)

For example, I have about 10 books checked out from the library on different subjects, ranging from sociology, psychology, language, and history. A few of the titles:

The Psychology of Abortion
A Mind of Its Own: A Cultural History of the Penis
The Mind of a Mnemonist
The Paradox of Choice: Why More Is Less

Okay -- I'll concede that all of those have tenuous ties to psychology.

Nevertheless! The purpose of this post is to recount the things I did this weekend... 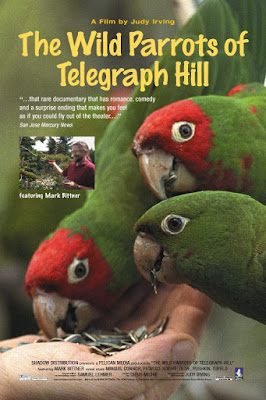 I picked up The Wild Parrots of Telegraph Hill from the student library on a recommendation I heard from one of my classes this semester. It's a 2005 documentary (with a soundtrack straight out of 1986) about a free spirit guy, Mark Bittner, who moved to California in search of a music career, then did a few odd jobs before realizing that he didn't want to work at all. Somehow, he ended up in an unused cottage on Telegraph Hill in San Francisco. The owners of the property were okay with it... until they decided they wanted to renovate the place. So Mark is given the boot at the end of the movie, and he leaves behind his precious parrots, but don't worry -- it's not all bad in the end.

This movie was very powerful. Mark is a very spiritual dude, and it brought out a bohemian part of me. I too wanted to grow my hair long, shed my office job, and just feed the parrots. Of course, he made a lot of sacrifices doing this, but that's to be expected. 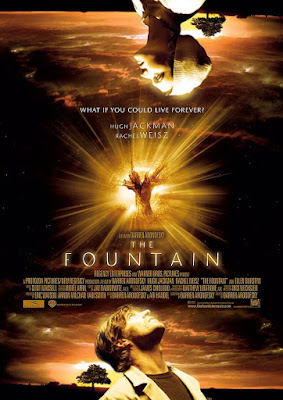 Sunday held 2006's The Fountain. It's a beautifully filmed, hard to categorize movie. It's got elements of sci-fi, fantasy, and even a little bit of horror. But it's also weirdly realistic and you can easily identify with it.

It's a very powerful movie, but when I tell you the plot line, it will sound very cheesy. Here we go: There's this dude. And there's this chick. There's a love story. And there's a story about immortality. And time-traveling. Well, not exactly time-traveling, so much as time-hopping in the narrative. So it's a love story across the ages. (The trailer said 1500 A.D., 2000 A.D., and 2500 A.D., though there's no specific mentions of these dates within the movie itself.)

I'd also recommend seeing this movie, though I'd suggest watching it on a fairly nice day, so you can go out and appreciate nature and society after watching it. (I.E. -- It's a bit of a downer at times.) The book I breezed through this weekend was by renowned writer Margaret Atwood. Titled Payback: Debt and the Shadow Side of Wealth, I thought it would be an interesting read. It was. (Excerpt here.)

But it wasn't what I expected. Instead of a writer's perspective and analysis of the current debt situation, it was instead a writer's perspective on the term debt and it's meaning throughout the ages. Atwood is an apt student of the arts and humanities (especially plays), and she does a few sweeping analyses of religion, plays, literature, and other forms of the arts in her survey of what debt has meant, how it's repaid, and how it helps and hurts both the creditors and the debtors.

There are no practical tips here, but there are a few neat revelations. Of how Ebeneezer Scrooge resembles Faust, of how Shakespearean drama fits in, of how religions view moral/spiritual debt, et al. So, if you'd like to read about the philosophical concept of debt, give this a shot. If you want some more practical tips, check elsewhere.

Overall, it was a good weekend.
Posted by Justin DLC at 9:10 AM 2 comments:

Roger Ebert recently wrote an enormous response to Ben Stein's documentary, Expelled: No Intelligence Allowed. Apparently, Ebert had been taking flak for not reviewing the movie.

I only discovered after reading this (having read Ebert on and off for years) that his decision to exclude a movie from his reviews has just as much impact as giving a movie a zero-star review. Because any sort of publicity is good publicity (I, for one, am now encouraged to see just how awful Stein's movie is), Ebert ignoring this release spoke volumes. But, in the end, he had to defend himself even against that action (as if Stein's movie were some sort of blockbuster release that everyone saw and that everyone was talking about).

For the record, the professor that Ebert refers to as Prof. Monty Python is actually a professor at FSU here: Michael Ruse. He's a professor of philosophy and director of the History and Philosophy of Science program here. Interesting fellow.

Also for the record, I'll have to agree with Ebert on this one. I guess you could chalk that up to my ongoing higher education. Or to common sense. Either way.
Posted by Justin DLC at 11:51 AM No comments:

I will only admit to a few nerdy things at a time.

I have been a member of a Spoon messageboard for years, and it's fun to gauge how old fans react to new music and to newer friends. Also cool to talk junk about Spoon, and hear about where Spoon shows up, like when I was in the Village Inn in Tallahassee, and "The Underdog" was playing.

The best part, though, is that these Spoon fans are very dedicated. They organize compilations, point to interviews and downloads, and occasionally discuss other music that might interest me. Today, there was a post from someone who collected and organized all the free downloads Spoon has offered over the past year.

Thanks to Greg for the listings.
Posted by Justin DLC at 8:24 AM No comments: