I knew it was serious, because right after I opened the office door this morning, even before I could turn on the lights, one of my female co-workers was in my office with a work request for me to put in.

"I hate to spring on you first thing in the morning, but could you call into building services about the last stall in the ladies room?"

Approximately 45 minutes later, our floor's normal daytime custodian was in my office. She was gathering the trash and had noticed the disturbance in the ladies room.

"Do they want me to clean that up, or are they going to send someone else?"

Two phone calls later, it was clear: Janelle would be our Great American Hero this morning. She departed briefly to survey the crime scene for a second assessment. Back in my office:

"That's just nasty. I'm going to need some bleach -- and what should I use to clean it up? How do you just miss?"

10 minutes of discussion followed. A male graduate student had arrived at my desk during this discussion. He added to our collective joking, the only way we could cope with the situation. Josh mentioned that we could determine the exact location of the perpetrator from the splatter. We might gather DNA evidence.

As the description of the violence seemed ever more fantastical, Josh volunteered to witness the crime scene. He reported back with the following snapshot: 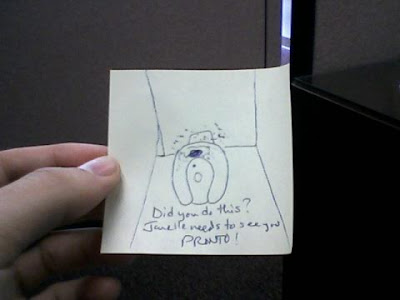 Janelle ended up clearing the scene. She received a hug and a promise of a gift for her efforts.

The offender remains at large.
Posted by Justin DLC at 9:38 AM 7 comments:

In honor of Jackson Pollock's birthday, please allow me to post this link to a wonderful flash site where you can make your own drip painting. 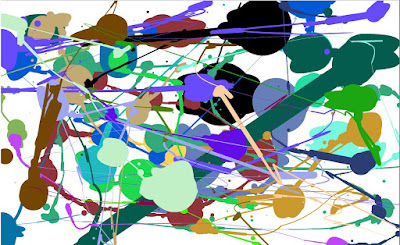 I found it about a year ago around this time... probably on his birthday.

Click the mouse to change paint colors. Press the space bar to clear the painting, press esc for more info on the creator. Post your creations! (I just used "print screen" -- let me know if there's an easy way to export these...)
Posted by Justin DLC at 8:25 AM No comments:

Rules: I wrote a note with 25 random things, facts, habits, or goals about me. *, just read my note and then do whatever the hell you want to, because nobody likes chain messages that promise imminent empty threats of voodoo curses for those who don't participate. * I want you to know more about me.

3. I was once in a short lived band called Nuclear Tits. We only had one practice and one recording (which we accomplished simultaneously).

4. On average, I probably hear from 30-50 new albums that are released every year. I also discover and listen to a number of older albums every year.

5. I am always wanting to read newspapers (or news websites) but use the excuse that I don't have enough time. This excuse doesn't hold muster, though, because I end up reading a ton of crap on Google Reader all the time.

6. I can juggle. Three balls at once. I can do only one juggling trick, and I forget what the name of the trick is, but it makes all the balls go in a circle.

7. When writing, I constantly surprise myself with words or phrases like "hold muster" and "obfuscate" that I didn't know that I knew. I find myself looking up these words to make sure they exist. 11% of the time, they don't.

9. I have at least two anonymous online personae.

10. If I had all the money in the world, I would give 99% of it away and use the remaining 1% on equipment and resources needed to make movies, albums, artwork, websites, and various other creative ventures.

11. Having landed a girl and a job that care not about the way I carry myself, I haven't ironed any of my clothes in years and I let my hair fall of its own accord.

12. I've never been on a train, helicopter, or motorcycle.

13. I know how to make two pieces of origami, if you want to call them that: the paper balloon, and the fortune teller.

15. I have a habit of hating sounds associated with the consumption of food and beverages (except when they're coming from me, in which case I love them).

16. I regularly read the blog of a 13-year-old whom I do not know personally. Mainly because he can be insightful even while referring to "mysterious boob orbs": "Attack of the alien breast implants!"

17. I know my colons from my semi-colons and my Colin Powells and that other colon that people have. And I know how to use all of them properly.

18. I wouldn't consider myself a grammar fiend, but I do tend to catch blatant typos or Miss Spellings in nearly everything I read.

19. I read over 90% of the emails I send at least twice before sending them.

20. I have a j'awesome brother and sister. All three of us have "accommodating" office jobs that allow us the opportunity of trying to entertain each other online every day.

22. I'm a social eater, a term I grabbed from an episode of Oprah a long time ago.

23. I hope to write a book someday, be it novel, academic, investigative, or otherwise.

24. I am becoming very skeptical of the human concepts/constructs of infinity (outside of its practical uses in physics and mathematics) and time.

25. I hope to record a full-length album someday, be it rock, rap, instrumental, or otherwise.


*Nevermind. I don't like tagging people.
Posted by Justin DLC at 1:32 PM 3 comments:

I listened to a couple other tracks from the new album and was underwhelmed.

I sort of know what it is -- they turned up the wrong knob on this one. Too much buzzing electronic dance, not enough roaring rock riffs. Big choruses, yes, but so what. Give me something I can work with.

Maybe I'm so vitriolic because the Franz was some of the much-balleyhooed stuff I listened to when I first started going to college, and it sort of paved the way for some of my musical interests.

Sure, comparing it to the older albums, they might just be progressing down a path they were sure to follow, but I think they followed it too far.
Posted by Justin DLC at 11:21 AM 3 comments:

Another slow day at the office. 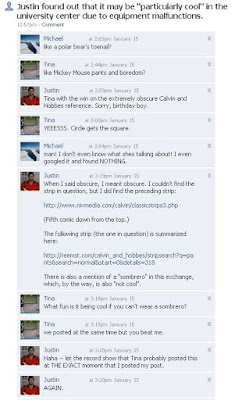 (Click for larger picture.)
Posted by Justin DLC at 1:23 PM No comments:

As you may be able to tell already:

1) It's a slow morning in the office.

2) I'm recording nearly all the books I read on here as a way to remember.

I recently dropped Margaret Atwood's Oryx and Crake after about 50 pages. I couldn't really get into it, but it seemed like a cool premise -- futuristic, genetic programming/splicing, animal hybrids. But the pacing was off for me.

But before that, I indulged in Kurt Vonnegut's A Man Without A Country, a collection of essays that were published in a Chicago newspaper. The essays cover (post-9/11) current events, with the overall thrust being that Vonnegut, a war veteran, no longer feels that his country represents him. Some powerful things, but as always with Vonnegut, dealt with hefty portions of wit and humor.
Posted by Justin DLC at 11:09 AM 1 comment:

Boo for America and the Hollywood Foreign Press.

Suckdog Millionaire won the lion's share of awards at the Golden Globes the other night.

In other, related news, I rarely care a hoot about historical television mini-series or movies.
Posted by Justin DLC at 9:39 AM No comments:

Reading on the rise.

But since Harlequin romances still make up like 60-70% of book sales, I'm guessing they make up 100% of the fodder for 40% of these readers.
Posted by Justin DLC at 9:36 AM No comments:

Posted by Justin DLC at 3:32 PM No comments:

Over the winter school break, I also read a book about a Russian memory expert, "S."

The Mind of a Mnemonist
By: A.R. Luria

It was a translation of a book from a Russian psychologist who studied this mnemonist who made a living performing feats of memory. He would get paid to put on shows where people just read off a list of words or nonsense syllables, and S. would repeat them back. Or study a chart of numbers. Or recall lines from Dante's Inferno in Italian, a language he did not know, after hearing them recited once.

S.'s method (he has a real name that I forget -- it's in a Psychology textbook somewhere) was synethestic in nature -- he would form a little short story out of images that he saw from each word or number. Anything he heard, he could either taste or see. Voices were metallic. Pitches were lengths of silver, or white, or orange.

It's a fascinating take. Just imagine processing the world this way -- as a kid, S. could imagine that he actually went to school, and think that he did, when he was still in bed. He just pictured it. He could raise or lower his body temperature by envisioning himself out in the cold or in extreme heat. He could raise and lower his heartbeat too.

There were sad parts -- he had trouble getting the general meaning of things. And he always felt like something great was going to happen to him, or he would do something great. He seemed to live in a haze most of his life.

Choices, choices, so many choices.

I read a book on choices. It was called:

The Paradox of Choice: Why More Is Less
By: Barry Schwartz

Great title. I thought it should have included a ghost or something.

It was a fun read -- a fast read. Much of the things I read I knew about already. We have too many choices available nowadays. Size of jeans, comfort fit, boot fit, relaxed. Stonewash, faded, colored. Every product comes in different forms.

His idea was that this growing number of choices made people unhappy and unfulfilled, because they always felt like they could find and obtain something better than what they had. Since there are so many choices, it's up to the individual to make the right decision, and afterwards, if things go wrong, we can always blame ourselves for not picking better.

He used real-world examples from shopping marts, employers (health insurance, 401k enrollment), and other situations where we're faced with an ungodly number of choices.

It was good to read through things and realize that everyone is swamped with decisions all the time. But it wasn't that successful in suggesting things to do about it. It's more of a "be aware" book.

10) It's predictable.
9) It's cheesy.
8) It's boring.
7) Bad acting.
6) Bad directing.
5) Bad story.
4) Bad cuts/shots/et al.
3) It's actually worse than watching a real episode of "Who Wants To Be A Millionaire?"
2) The lesson is to pursue your ideal woman, no matter how much of a bitch she is.
1) 20 Million Rupees, which would technically make you a rupee millionaire, translates to just over $400,000. It should have been called "Suckdog Thousandaire."
Posted by Justin DLC at 4:21 PM 2 comments: