A piece of peace, please.

Two idiosyncratic phrases that use homonyms meaning the same thing but spelled differently... thanks English.

14. Hold or keep one's peace, to refrain from or cease speaking; keep silent: He told her to hold her peace until he had finished.

33. Speak one's piece, to express one's opinion; reveal one's thoughts upon a subject: I decided to speak my piece whether they liked it or not.
Posted by Justin DLC at 8:58 AM No comments:

Post Preamble: Having submitted my official review of Wilco's new DVD, I now feel free to post this. It will probably not interest the majority of people on the internet, but it was a lot of fun to do. And now, after seeing the DVD a few times, I will have to scoot down and correct a few things... 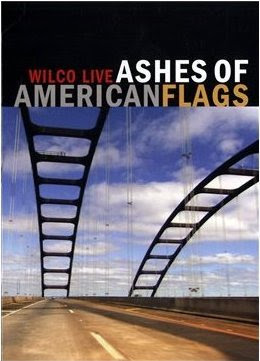 Wilco's new live DVD arrived in the mail yesterday (which, at the time of writing was Monday, April 20). Here are my real time responses to watching it for the first time.


-Tweedy starts out in a brown leather jacket and felt cowboy hat. Brings a tear to my eye.

-Very much in the visual style of Sunken Treasure: Jeff Tweedy Live In The Pacific Northwest, which means I should be in a for a treat. Rain on bus windows, intimate, close-up shots (like in the recent Rolling Stones concert film, Shine A Light).

-"Ashes of American Flags" --- an appropriate starting song, directors. Props. [Edit: Christoph Green and Brendan Canty, of Fugazi fame, were directors for this.]

-Alright! White, rosy Elvis-style suit for Tweedy on the next song!

-I can't really believe that Glenn Kotche plays with a traditional drumstick grip. That guy is a beast.

-Nels Cline's Fender Jaguar and stack of Vox amps will haunt my dreams. [Edit: Actually, I should have known that the Vox amps are Tweedy's. I haven't read through this yet, but for an uncompromising look at Nels Cline's gear, take a look here. Yikes! According to Wikipedia, "Currently, Nels is using the Schroeder DB7 red amplifier built for him by Tim Schroeder of Schroeder Guitar & Amp Repair in Chicago, IL."]

-Glenn really needs to work on his clothing style. He has long, sweaty hair, and a sort of mechanic's shirt on. He looks like he wants to deliver me a pizza.

-"Handshake Drugs" is one of the infamous three-chord Wilco songs that works SO well. I am truly baffled as to how those songs work.

-Nels knows when to keep it simple. Two notes can work just as well as 200. Neil Young only needed one on "Cinnamon Girl."

-Bands are great, but once you're in them for more than a decade, you start to look like a baseball mitt.

-"The Late Greats" wouldn't be one of my choices to make the cut, but it's turning out to be good. Just an absurd song. But now it's absurd... with horns.

-"Kingpin" is another mediocre song choice, but at least it's meaty. (Nels' slide playing AND fuzzy green guitar strap saved this song performance from mediocrity.)

-Glenn has a frilly yellow pirate shirt that makes him look more like a flamenco dancer than a pirate.

-Jeff is doing his scratchy, high-pitched scream. Weird and gross.

-"Wishful Thinking" is a good chill-out song, but I hope they kick out the jams soon.

-Hmm... another soundcheck song. I guess I would prefer performances with a live crowd.

-I will accept "Impossible Germany" as a suitable song choice, and I will wait anxiously for great guitar sections.

-The guys are lying around and complaining about what rock and roll does to their bodies. Hahaha.

-The only song that anyone used a 12-string acoustic guitar on for this DVD was "Heavy Metal Drummer." Weird. [Edit: Nels used a 12-string electric on this song too! And on a few other songs.]

-"War On War" is a pitch-perfect closer. Mid-tempo rocker, but it can get gritty.

-Now for the bonus features.

What a great concert video. It nicely complements Tweedy's solo acoustic DVD, and it's a brighter side of Wilco than what is shown in I Am Trying To Break Your Heart. Nels Cline is a madman superstar, and everyone else is great too, it's just that it's very hard to look past Nels sometimes...

Wilco is definitely one of the finest bands I've ever seen live. It doesn't hurt that they have a very extensive, versatile catalog behind them and that it seems like they will never lose steam.

Buy it. Watch it. Repeat.
Posted by Justin DLC at 9:35 AM No comments:

I just had the unique experience of being excited, inspired, and disgusted all at the same time.

On my lunch hour, I meandered over to the campus bookstore. I was looking at a section of books that were a mixture of new releases and current bestsellers when I spotted a tiny white hardcover book near the bottom. Upon closer inspection I saw: 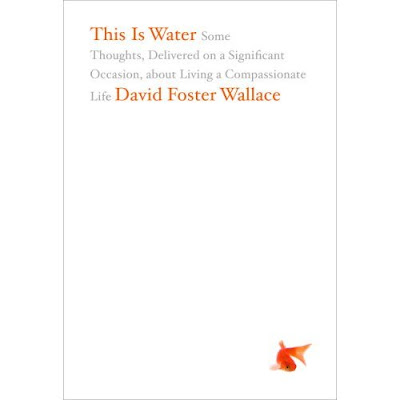 This Is Water: Some Thoughts, Delivered on a Significant Occasion, about Living a Compassionate Life
By: David Foster Wallace

Luckily, Amazon.com has the short author bio that I saw on the back bookflap:

David Foster Wallace is the author of the novels Infinite Jest and The Broom of the System and the story collections Oblivion, Brief Interviews with Hideous Men, and Girl With Curious Hair. His nonfiction includes the essay collections Consider the Lobster and A Supposedly Fun Thing I'll Never Do Again, and the full-length work Everything and More. He died in 2008.

Next, I checked the description of the book:

Only once did David Foster Wallace give a public talk on his views on life, during a commencement address given in 2005 at Kenyon College. The speech is reprinted for the first time in book form in THIS IS WATER. How does one keep from going through their comfortable, prosperous adult life unconsciously? How do we get ourselves out of the foreground of our thoughts and achieve compassion? The speech captures Wallace's electric intellect as well as his grace in attention to others. After his death, it became a treasured piece of writing reprinted in The Wall Street Journal and the London Times, commented on endlessly in blogs, and emailed from friend to friend.

They should have added: "And now, Little, Brown is trying to turn a profit from it." (The bookstore's price was $14.99.)

I'll admit that I don't know too much about the man, but I've read a few essays by him --- enough to convince me that he would not take kindly to this sort of release. Why not hold off until a collection of his unpublished work comes out and add it to that? Or add it to a biography of him that comes out?

This seems like a sick attempt to cut a profit from Wallace, who was a great writer. I was excited to see another piece of his work getting published, but I was disgusted when I realized that I could have easily found this online. In fact, it was the first link delivered from a simple Google search.

So how does anyone besides the publisher profit from this? The book was no bigger than my hand. The publisher literally spaced out every sentence onto a separate page, making the small book 137 pages. I was able to read it in 20 minutes. ($14.99???)

The saddest part is that Wallace mentions suicide in his speech, and there is no mention anywhere in or on the book that he himself eventually succumbed to it. Wallace was expanding on the claim that college is supposed to "teach you how to think." He mentioned the mundane existence of day-to-day adult life driving around in traffic and going to the grocery store. He said that college really just tries to teach you what to think about, and how to control your own thoughts about things to stop you from going crazy.

I think the publisher owed it to the audience to mention that Wallace committed suicide after a long struggle with depression. It's grotesque, yes, and it may be uncouth to mention in the author bio, but it's an important aspect of him that gives more meaning to his words. The publisher is trying to get away with a gimmicky release. They're trying to trick helicopter moms into buying this famous graduation speech from this famous writer.

How could anyone have thought this was a good idea?

(Now, I don't know the particulars of the publication. I suppose the family or estate must have cleared it, and maybe all of the proceeds are going to a charity for depression awareness. And, in fact, some of what this book/speech is getting at is thinking about the alternatives to your gut reaction. My default setting was to despise the publisher for cranking out this tiny piece of crap book, when maybe it's doing the Wallace family justice by donating proceeds. It's certainly getting his name out a little bit more.)


David Foster Wallace, whose prodigiously observant, exuberantly plotted, grammatically and etymologically challenging, philosophically probing and culturally hyper-contemporary novels, stories and essays made him an heir to modern virtuosos like Thomas Pynchon and Don DeLillo, an experimental contemporary of William T. Vollmann, Mark Leyner and Nicholson Baker and a clear influence on younger tour-de-force stylists like Dave Eggers and Jonathan Safran Foer, died on Friday at his home in Claremont, Calif. He was 46.

A spokeswoman for the Claremont police said Mr. Wallace’s wife, Karen Green, returned home to find that her husband had hanged himself. Mr. Wallace’s father, James Donald Wallace, said in an interview on Sunday that his son had been severely depressed for a number of months.
("David Foster Wallace, Influential Writer, Dies at 46"

I want to point out the following sentence in the book's description:

"The speech is reprinted for the first time in book form in THIS IS WATER."

I only bring this up because between the time I posted and now, I discovered that this commencement speech was included in the Best American Nonrequired Reading for 2006. The Best American series is a massively available series. This just adds to the idea that Little, Brown is trying to cash in big time on this little book --- this essay was already printed in a book.

In case you're interested, here is the reprint of this essay in the Wall Street Journal.
Posted by Justin DLC at 2:15 PM No comments: