I had my first Shakespeare class on Tuesday night, and nearly the entire time was devoted to historicizing Shakespeare -- what sort of culture and society was he from? What was happening at the end of the 16th century and the beginning of the 17th century?

The class is split unevenly between undergraduate students (the overwhelming majority) and graduate students (a handful). Nearly the entire time, a burly graduate student sitting directly behind me was scoffing. The professor would describe how people during Shakespeare's time were led to believe that the king or queen was chosen by God, ruled by divine right, and could not be challenged. *Chuckle*

We see a diagram of the world from that time period. 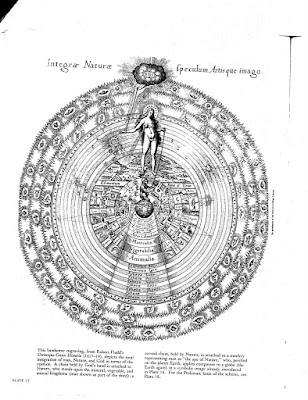 Our professor mentions how the church maintained the geocentric model against Copernicus and Galileo. This guy behind me erupts in laughter. Nevermind all the laughs he puts out when we start talking about the sonnets, and Shakespeare's "Young Man" and "Dark Lady."

Naturally, I was distracted by all of these laughs, and I began to think about how people nowadays always assume that modern societies are so much smarter and better than past societies. Look at their religion! Their concepts of sexuality! They didn't even know about the sun!

Our basis for this sort of Historical Prejudice is our modern science, our technologies, our growing knowledge of the world around us. But, in fact, our modern science is just as much a system of beliefs as religion. It's just as much a human fabrication as language, as art, as morality, ethics, justice, hope, love, desire, any emotions. Why do Christians believe in the Bible, in Jesus as the savior, in the Christian God as the lord, whereas people in other parts of the world might believe in other entities, texts, saviors? It's the way we're raised.

Why does modern man believe the sun is the center of our solar system? Because everyone we've ever known has told us that the Earth revolves around the sun, and not the other way around. Parents, teachers, scientists, strangers. They all tell us this constantly as we're growing up.

Assume you could take a man without any scientific or historical knowledge and place him in a field for a day. You ask him about the large, bright object above him. Perhaps he looks around and sees an ant moving around a tree trunk, or sees a bird fly across the sky, or a lion walk across the field. The man will naturally respond that "The large, bright object in the sky is going across the sky." And he would be correct. In fact, he would be deemed insane to think otherwise.

Notice that I am not going into more details. Because I don't know them. Ask me to rationally explain to someone why the sun is the center of our solar system, why I know that the Earth revolves around the sun and not the other way around, and I can't come up with any evidence. I don't know science that well. I assume that thousands of people are not pulling the wool over my eyes. (Ask people on the street, and I'm guessing that maybe 1 in 100 people would be able to come up with the science for this.)

Which brings me to another, somewhat related point. I recently read a magnificent essay by David Foster Wallace. He wrote the introductory essay for the Best American Essays 2007 collection that he "edited" (he prefers the term "Decider" to "Editor," since he didn't change anything so much as pick out the essays that he liked). In the essay, he explains how every word on the cover of the book is false or misleading, how he and the series editor and the series itself is biased, and how society at large is very dependent on people making decisions for them. He refers to a "Total Noise," all of the junk out there, all of the possible options we have to choose from, all the sheer amounts of information, and how normal people need to rely on experts to deduce things for them. No one can handle all of this information without going crazy.

He also somehow manages to effectively lambaste the Bush administration and artfully introduce the essays in the book without it sounding like the ramblings of a madman. I haven't even read a single main essay out of the collection yet (he also mentions how the editor's essay is rarely read, and is read last if ever), but Wallace's essay just blew me away. It comes highly recommended. Here's an except, and I'm guessing the full text of the essay was posted on Houghton-Mifflin's website before, but was taken down.

My whole point is, like the discipline of anthropology tries to do, we should not assume that our society is the apex of evolution, that everything is getting better all the time, that people are getting smarter throughout the ages. We should not assume that other cultures and older cultures were inherently dumber than we are. Remember that much of Greek philosophy, science, and art was lost for a long, long time. People would start coming up with these scientific and philosophical ideas and then, when materials were rediscovered, they would realize that the Greeks had already explored those ideas hundreds of years before. Collectively, considering the entire history of human life on the planet, we've lost the majority of information from past societies. For example, the Spanish burned all but three of the Maya written texts because they were seen as being too polytheistic. Then everyone assumed that their written language only kept track of the stars or something stupid like that, until someone came along and cracked the code and started reading the Maya history. (I saw an excellent special the other night on Nova called Cracking the Maya Code.)

So give Shakespeare and his contemporaries the benefit of the doubt, and stop waving your damn iPhone around like you're the cock of the walk, moron. 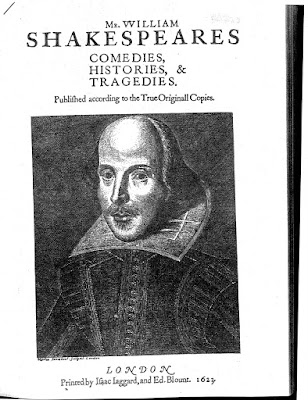