Today is the first day of my summer vacation. Since I am no longer in school full time, I am forced to relish mustard this time off of work that I get. For me, this means trying to stay away from the Internet, and this will be easy once Jess and I get to upstate New York on Tuesday, where we will have little-to-no access to a computer, and where our cell phones may very well get no service at all (sorry fellow Twitter-ers).

Today we made it from Tallahassee, FL to Melbourne, FL on the first leg of our vacation journey. This weekend is for visiting family and old haunts. And since there is a newer computer here at home (us kids bought it for our parents for a Christmas gift), I've decided to wean myself off the Internet as opposed to going cold turkey. So tonight I will be spending only one hour online, the girth of which will be taken up by composing this post and uploading four pictures to Flickr. (My parents are still on DSL here, and trying to upload to Flickr here is a little like taking a Razor mini-scooter out on the information superhighway. But I digress.)

After a boring start this morning (chores and errands not worth taking the time to even mention... whoops), we started off in the sweltering Florida heat on the sweltering Interstate 10 in my sweltering 1998 Buick, which unfortunately does not have working air conditioning. If I pump it full of freon, it will work for a couple weeks or so, maybe, but it's pretty much called it quits.

Humans being hot in Florida is not much of a story, but throw in a domestic cat, and... well, maybe you'll have PETA writing an email. We decided to take Simon with us (for whatever reason), and he decided to freak out and meow/yelp/sound-like-a-tortured-boy for a few minutes before we took him out of the (amply sized) metal barred cage we had put him in. Jessica held him in her lap in the front seat, and everything was okay. Except then he started panting. I wish I would have gotten a picture. Simon panting looked very much like a cross between The Joker and some Daemon Basement Cat.

Thinking quickly, we stopped to grab a bag of gas station ice ($2.53, really?), threw a towel over it, and laid the cat on top of this makeshift ice station. He cooled down right quick, and we continued on our journey. (Note that Simon does not mind ice cubes being rubbed all over his long-furred body. Ssh. Don't tell PETA.) 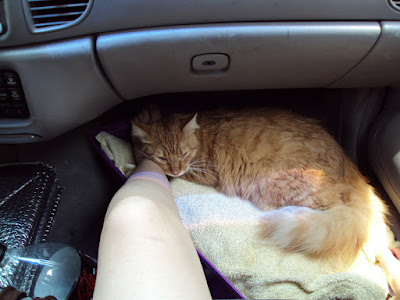 Driving through my hometown was just as eerie as every time I'd been away for a while before. (Prize for most best understandable/grammatical sentence, plz.) When I got home, I saw that Shadow's getting old.

Sidetracking Anecdote: I grabbed my digital camera to upload photos, and I spent about three minutes trying to fit the USB cord that goes with the camera into the side of the camera. Then I realized that the USB cord I had brought was in fact for my other, crappier digital camera (that my sister had gotten for free with something and had given me). I was frustrated... until I noticed that my parents' computer has slots for memory cards...! I popped the memory card out of my digital camera, and VIOLA [sic]! It worked.

Okay, well my online time is almost up. I'll probably be off to read some more David Foster Wallace. There will probably be nothing more to update until we've been to NY and back. So have a nice week, The Internet. Don't do anything I wouldn't do.
Posted by Justin DLC at 10:12 PM