Friday evening my band, Dead Letters, was practicing at our drummer's house. We were trying to polish things up for our upcoming show at The Engine Room this Wednesday. After playing for about half an hour, someone knocked at the front door. Two girls then entered, introduced themselves as the new neighbors, and invited everyone present (members of the household and our band) to the party they were having on the following night (Saturday). After about a minute, they also invited our band to play. (As someone pointed out to me, this sounds like an intro to a pornographic movie. I can assure you that it was not.)

We looked at each other for a second, and then immediately agreed. House parties are downright rock and roll. They're different than club gigs because the admission (and usually the drinks) are free. We know a good opportunity when we hear it.

The rest of our practice was then devoted to learning a couple of covers. Right off the bat, we thought we could do "Buddy Holly" and "Hey Ya" pretty easily. So we prepared those, and later that night and the next day we entertained more ideas for cover songs. About three hours before we started playing at the party, we were hammering out more covers. We were like a machine. The songs we quickly learned and performed were as follows:

We did El Scorcho at the party as an encore without having practiced it before. We mixed in most of our original songs, which, I think, were well received. Somebody even said they'd come to our next show. I think we got offered more party gigs already. I don't want to sound conceited, but even with our bass player missing that night, we sounded really good out on their concrete slab of a porch. Energy was high and the Natural Light keg beer flowed. I'd love to play one club gig and one house party per month. I think that's my goal. We gotta learn some more cover songs! Suggestions? I really loved playing "Hey Ya," because it was a song I can respect, but it was also a crowd pleaser.
Posted by Justin DLC at 11:52 PM No comments:

Yesterday morning I found myself driving down one of those small one-way streets that feeds into Tennessee Street as I made my way to work on campus. I was in the middle of three lanes and there weren't any cars around me. As I approached the Tennessee Street light, I realized I needed to turn right, but as I made my way into the right lane I saw a man standing in the crosswalk. The light was turning orange (I know some people like to call it yellow), so I was going to stop anyway, but this man was in the way between me and a right-hand turn.

As the light turned red, other cars pulled up beside me, and I soon realized that if this man did not move, I would be stuck here for a bit. It didn't look like the man was going to move. He stood in front of me, looking eastward, for the length of the red light as traffic sped by him. I was afraid to beep as I was already scared for my safety (my windows were down and the man was not too far in front of me).

The man was dressed in blue jeans and a beige sports coat, both of which were a bit dusty and a bit too large for him. His shoulder-length blond hair was thinning near its roots. As he stood in the crosswalk in front of me, as traffic passed by him on his right, he began to raise his right arm in what suggested (in my mind at least) a sort of salute --- like the "Heil Hitler" salute. Except that his hand was not flat. He was making the "okay" sign with his hand... 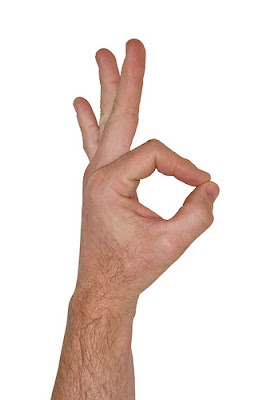 and the first vehicle to pass by him was a large city garbage truck, which made me think that he was saluting the workers on it. (In high school, I remember visiting a local park in my neighborhood and seeing an overweight, shirtless middle-aged man who was quite noticeably flicking off airplanes in the sky as they passed over him. I was reminded of this as I watched this man in the crosswalk.)

Then the man began to raise his left foot up, Karate Kid-style. As a motorcyclist went by, the man, whom I took for being homeless at this point, flicked something into the middle of Tennessee Street. My light was still red at this point, and traffic was steady, so I wasn't really upset about this man blocking my turning path so much as I was disturbed by his appearance and actions. During a small break in traffic, the man walked calmly into the road to pick up what he had tossed. I assumed it was a coin or something close to that, but after picking up the object, the man brought it up to his mouth and I realized it was a cigarette. (It may have been a cigarette butt, because thinking back, I don't remember there being any smoke.)

The man soon returned to his place in front of me (in the crosswalk), and before long, he started making his way along the rest of the crosswalk. My light turned green, and the man was now blocking the car in the lane next to me, but it looked like he was making his way across.

I don't know why, but this experience really stuck with me. It made me think that this man was in some type of reality that was far from what I know and experience every day. Not just in terms of how our lives or daily actions differ, but when I saw him doing these strange things, he was completely calm and serious about it. To him, this was a normal way of conducting himself. I see a lot of homeless people around Tallahassee --- talking to themselves, begging for money, holding signs. But this was something different, and I'd rather not find out what.
Posted by Justin DLC at 8:53 AM No comments:

These Are My Twisted Words:

So here's a new song, called 'These Are My Twisted Words'.

We've been recording for a while, and this was one of the first we finished.
We're pretty proud of it.

There's other stuff in various states of completion, but this is one we've been practicing, and which we'll probably play at this summer's concerts. Hope you like it.

A recent post on Radiohead's blog about a free song. They also just released another song, but are charging one pound for it.

This follows their recent announcement that they're sort of over the whole "album" thing:


Radiohead Says No More Albums — Radiohead said in a magazine interview that it wouldn't release any more full-length albums, instead focusing on downloadable singles like its recently released "Harry Patch (In Memory Of)" and shorter EPs.

— Radiohead's Thom Yorke at a July 2008 concert in Amsterdam.

I think it might just be their way of branching out for the moment. I still embrace the full-length album as the pinnacle of human achievement in music, and I don't think it's going anywhere despite online streaming services, torrents, file sharing, or anything else. It's a whole thing, like a novel, like a movie. Maybe that's just my opinion.

[FYI: This is the first of hopefully many posts aided by the recently added "send to" function on Google Reader. Of course, I'm going to bounce over to Blogger real quick so I can preview it before I publish it... And... it's not perfect. Took some cleaning up. ]
Posted by Justin DLC at 8:48 AM No comments:

Hope you enjoy your lunch on Applebee's!

My name is Bill Palmer, founder of Applebee's. In an attempt to get our name out to more people in the rural communities where we are not currently located, we are offering a! $50 gift certificate to anyone who forwards this email to 9 of their friends. Just send this email to them and you will receive an email back with a confirmation number to claim your gift certificate.

Sincerely
Bill Palmer
Founder of Applebee's
Visit us at: www.applebees.com

It really works, I tried it and got my Gift certificate confirmation
number in 3 minutes.

The above was a forwarded email I received today.

My Question: What do I have to do to get the chance to never eat at Applebee's ever again?
Posted by Justin DLC at 2:25 PM 1 comment: