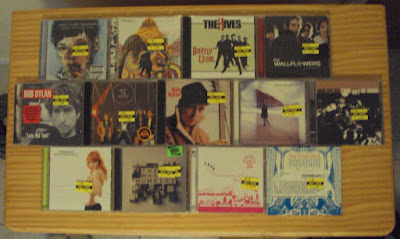 As undergraduates at FSU, my friend Matt and I used to go to Vinyl Fever on average maybe once a month. But many times it was more frequent than that.

Vinyl Fever was a locally owned record shop that sold new and used CDs, new and used vinyls, and some DVDs. It was one of only two stores: the other was in Tampa, and I can't quite remember which came first. (Nor do I care to look around to see if the Tampa branch is still extant now...)

Anyway, after a while, The Feve became something essential to our Tallahassee experience. But after a years (after noticing how many CDs I had towering around me), I stopped visiting the store and I pretty much stopped buying CDs altogether. I still listened to music, and I was still reviewing albums, so I had a steady influx of new music to keep me busy.

Then, one day (according to my Gmail records, it was around Feb 11, 2008), I heard that Vinyl Fever had been bought out by a larger chain. For reasons that I can't fully explain, I was shocked and offended by this. I soon got over my reaction, since I noticed that the same people worked there, and outside of adding miscellaneous merchandise, the store remained essentially the same.

In times of financial need, I would sell some of the... "more questionable" CDs I had accumulated over the years (many as promos coming into the newspaper). The Feve would only give me about $2 per CD (if that), but I saw it as also helping to keep them in business (especially since I wasn't buying CDs anymore). I must have sold them literally 50 CDs (at least) over the years.

But I suppose it wasn't enough. Last week, I heard from a friend that Vinyl Fever was closing forever. For reals. Their website makes it look like such a festive, holiday announcement. Like everything will be okay.

I stopped by on the day I heard the news. The small parking lot was full, and people were parking on the grass. I had to park across the street. Outside, one of the guys who'd been working there for years was on a smoke break. I asked him, "When's closing day?" He took a drag on his cigarette, turned his head away, and mumbled "I don't know. When everything's gone, I guess." (I'm really not trying to embellish the moment here. This was really something.)

Yesterday, Matt and I went back for what I assume will be my last time. (Of course, if they have a concert on closing day, I will most certainly be there. Hell, I'd love to play a concert there on closing day! Somebody make that happen, please.) There were people carrying around shopping baskets with 30 CDs in them. Because of all the people packed in there, it was pretty hot and muggy, despite the cold December air outside. (Okay, I'm sorry. I know there are wars and there's world hunger and suffering. But this store can still mean a lot to me. It's something more than just a shop, since it's a portal to new music. And music means a lot to me. Hence, Q.E.D., don't tease.)

In the pictures bookending this post are the CDs from the excellent haul I had from these last visits to Vinyl Fever. All used music was 50% off the sticker price, so I got these 13 albums for about $35. That's an average of about $2.70 per album. And so far, that investment been worth it.

Here are the albums, starting from the top left in the picture:

Manic Street Preachers — Journal for Plague Lovers: My brother has been a huge Manics fan (props to him for the non-parenthetical part of the title of this post, BTW). He had been raving on about this new album. I just listened to it, and it's pretty great.

An Albatross — Blessphemy...of the Peace Beast Feastgiver and the Bear Warp Kumite: Also recommended from my brother, though I'd heard some of their songs before. Actually, I'll pop this one in the player now while I work on the rest of this post. (Update: Upon listening to this in full, I also deem this to be an excellent buy.)

The Hives — Barely Legal: Swedish punk rock at its dirtiest. This was their 1997 debut (which I didn't know at the time of purchase). It's somewhat grittier than their newer stuff.

The Wallflowers — Red Letter Days: Hadn't heard this one, but I liked other Wallflowers stuff, so I decided to give it a shot.

Bob Dylan — Bob Dylan: It's Bob Dylan. C'mon. I hadn't heard this first one, though I'd heard other early stuff. It's pretty good stuff, man. Raw. Give it a try.

John Vanderslice — Life and Death of an American Fourtracker: I first heard Vanderslice when The Moutain Goats opened for him on tour back in 2004 or so. I've heard him live once or twice more after that. For some reason, I didn't really like Vanderslice live. It's kind of stale and there's a lack of onstage energy. But on record, I think he's great. Nice instrumentation and atmosphere. If you're interested, he has downloads on his website.

Bob Dylan — Time Out of Mind: See entries for Love and Theft and Bob Dylan.

The Popheads — Eat Supermodels: A local band that I've opened for before (while I was in the short-lived Bombardiers). They were good. Furry pants.

The Magic Numbers — The Magic Numbers: A great album that I had downloaded but never purchased. I believe I listened to them from a Samir recommendation. This reminds me that there were a few philosophical/ontological quandaries during my time spent in Vinyl Fever yesterday. I came across albums (Loveless, In the Aeroplane Over the Sea) that I had in MP3s and that I loved and wanted on CD. I came across others (Hearts and Unicorns) that I already had on CD and wanted to buy again just because they were great albums at a killer price. There was one album I wanted to buy again on CD because mine had scratches (Breach). But I had to put things back and not buy duplicate music. For budgetary reasons. Fiscal responsibility, you know. The economy...

Enon — Lost Marbles & Exploded Evidence: I had missed them when they came to Tallahassee and I had always wanted to hear their stuff. Besides, I liked the album cover (always a good reason). I listened to this already, and it's good-not-great. Certainly not a disappointment.

The Features — Some Kind of Salvation: I got the first Features album in the budget section at Vinyl Fever shortly after it had come out. It was great. I wrote a review of it as a sample piece to be considered to write for the FSView. I've been waiting for this follow-up, especially after hearing about how they had label disputes and had gotten booted from Universal Records. This one is released on 429 Records, a new label founded by Kings of Leon.

Well, that about does it. As we were looking through records for what was probably our last time at Vinyl Fever, Matt and I kept finding stuff that we knew the other would be interested in. Most of the time, we also knew whether or not the other person had it in his record collection.

This is important stuff.

You will live forever in our hearts.

And on our shelves. 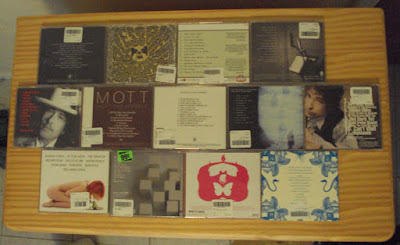