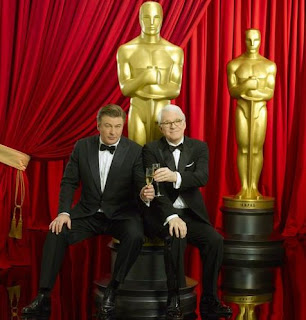 In the classic David versus Goliath scenario, a lower budget film about a bomb squad in Iraq beat out one of the most expensive and highest grossing films of all time. To sweeten the defeat, it should be mentioned that the two filmmakers vying for top honors in the 82nd Annual Academy Awards were once married.

Yes, director Kathryn Bigelow's The Hurt Locker managed to trump James Cameron's domineering blue beast, Avatar, for awards in Best Director and Best Picture Sunday night in Hollywood. The two categories are hardly ever split between different films (about three-quarters of all films that have won Best Picture have also won Best Director), a fact that was highlighted by Tom Hank's brief, anticlimactic announcement of the winner in the Best Picture category immediately after Bigelow had been escorted, visibly shaken, off the stage after winning the Oscar for Best Director.

Bigelow was the first woman to receive the directing award from the Academy. This should not come as much of a surprise: the story about the "battle of the exes" made for good copy, and the Academy took every chance it could to remind the audience during the awards ceremony that Bigelow could be the first woman to win, and fellow director nominee Lee Daniels (nominated for Push) could be the first African American to win.

Cameron's epic Avatar was nominated nine times, but only took home three statues - for Art Direction, Cinematography, and Visual Effects. Compare this to his haul in 1997 with Titanic: there were 14 nominations for that film, and it received 11 (including the coveted directing and best picture awards). But there's still some comfort left for Cameron: his last two major motion pictures have each broken the record for highest-grossing film, bringing in billions of dollars - though some people like to put an asterisk next to Avatar for charging higher prices for its 3-D showings.

The Academy does relish underdogs and surprises from time to time. The category for Actress In A Leading Role is a good representation of this: revered actresses Dame Helen Mirren and Meryl Streep were pitted against rising stars Gabourey Sidibe and Carey Mulligan. Squarely in the center of all that was the prolific Sandra Bullock, whose film The Blind Side was surprisingly nominated for only her role and for Best Picture. The heartwarming tale of mentorship in sports has been seen many times before, but Bullock managed to win the Academy over in her role as the firm-yet-loving Leigh Anne Tuohy.

Hosted by Steve Martin and Alec Baldwin, the awards were mostly playful. The hosts and presenters gently ribbed Meryl Streep for her total number of nominations - with 16, she is the most nominated actor in history. Ben Stiller appeared in an Avatar costume to announce the category for Best Makeup, admitting that he should have brought his Spock ears instead, since Avatar wasn't even nominated for that category. Star Trek, in fact, did win, for its transformations of Zachary Quinto into Spock, Eric Bana into Nero, and the other alien spectacles. Speaking of alien, did anyone else see that set of interpretative dances by The Legion of Extraordinary Dancers introducing the category for Best Score? Didn't think so.

Live television is a gift, though, and the 82nd Awards weren't without their awkward moments. Best Documentary winners The Cove were doing fine with their acceptance speech, until one member unfurled a sign telling the audience to text the word dolphin to some unexplained number. The camera cut away and didn't return until the guilty parties were being escorted offstage. Later, when tradition called for Sean Penn, the winner of the 2008 award for Best Actor for his role in Milk, to announce this year's winner for Best Actress, he managed to suck the energy out of the announcement by saying that he was not a member of the Academy and by making an obscure reference to the Academy overlooking certain actresses. Right.

The Oscars touted a list of 10 nominees for their highest prize this year - the first time since Casablanca won in 1943 that the Best Picture category has been this large. Since 2009 was not significantly better than any other year for films, it seems like an attempt for the traditionally built awards show to draw attention. It's also a way for the Academy to recognise more films without dishing out more awards - nominees like The Blind Side, District 9, and A Serious Man would have been hard pressed to make it into a list five. And yet another Oscar media soundbyte came in the form of Up's nomination for Best Picture - everyone seemed thrilled about this recognition, though no one in their right mind expected it to win against Avatar, Precious, or The Hurt Locker.

Otherwise, the Awards seemed fairly straightforward. The Academy continued its love of Pixar by awarding Up with the Animated Feature Film award, bringing the company's total number of awards to 22. Both Mo'Nique and Cristoph Waltz seemed like standout winners for their supporting roles in Precious and Inglourious Basterds, respectively. The only other true contest was for Best Actor. Jeff Bridges, nominated a handful of times since 1971's The Last Picture Show, finally took home the golden statue for his portrayal of down-and-out country singer Bad Blake, beating out George Clooney's charming role in Up in the Air, and more serious roles from Morgan Freeman, Jeremy Renner, and Colin Firth.
Posted by Justin DLC at 8:38 AM