This stuff scares me. 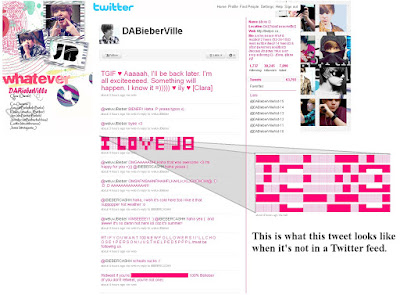 It's not a secret that Justin Bieber is a tween superstar. But ever since they changed the Twitter homepage to scroll through seemingly random tweets as I log in, I've seen a Bieber devotee posting their love every time I go to the site. I had to click through to a user named "DaBieberVille," and their feed started to scare me.

Then I saw something interesting... the above tweet, posted from the web, which looked like a picture. I didn't know you could do that! I clicked the tweet, and it popped up here. So... someone made an ASCII type post that only makes sense when you view it in a Twitter feed?

Also, check out the bottommost tweet on this screen capture:

I have no idea what that thick bar is doing in that tweet. Is it some foreign characters that won't render properly on my computer? Or are you supposed to fill in the blank?

I think the generation gaps are getting smaller... I'm 24, and these 13-yr-olds are stumping me on this Twitter shit.

Saw this today on the Twitter homepage (@TheJonasSource). Lazy, or resourceful?
Posted by Justin DLC at 2:29 PM