Alright, ladies and gents. This is the end all be all of the infamous Monty Hall problem, which I encountered a number of years back and which keeps rearing its ugly head in the company of friends, some of whom argue about its explanation re: mathematical probability v. "standard logic."

[Somewhat related detour first:] A while back, I ran across a friend's post of Lockhart's Lament --- one mathematician / educator's criticism of America's standards and practices of math education. It's a compelling document, but if you're interested in arguing about the different sides of that, see the sequel to that column.

Anyway, a co-worker today was talking about teaching math to her daughters (who are home schooled) and so I searched out this document for her. I found it on Dr. Keith Devlin's great column on maa.org, Devlin's Angle. After poking around a bit, I stumbled across his entry for the infamous Monty Hall Problem, a very good read if you have about 10 minutes or so. He gives a great description and a few great explanations of the problem (as well as a great suggestion about human psychology), but if you don't have 10 minutes or so (or don't want to click through), I'll quote a concise section of it here.

Suppose the doors are labeled A, B, and C. Let's assume the contestant initially picks door A. The probability that the prize is behind door A is 1/3. That means that the probability it is behind one of the other two doors (B or C) is 2/3. Monty now opens one of the doors B and C to reveal that there is no prize there. Let's suppose he opens door C. Notice that he can always do this because he knows where the prize is located. (This piece of information is crucial, and is the key to the entire puzzle.) The contestant now has two relevant pieces of information:

2. The prize is not behind door C.

Combining these two pieces of information yields the conclusion that the probability that the prize is behind door B is 2/3.

Hence the contestant would be wise to switch from the original choice of door A (probability of winning 1/3) to door B (probability 2/3).

If that still doesn't work for you (and you still don't want to read the full column with multiple explanations), you can head over to this site (which only appears to work in Internet Explorer) to test out the problem yourself --- you can click through the problem yourself, or have the computer run the test 10, 100, or 1000 times to see how it works out.

This is what I got: 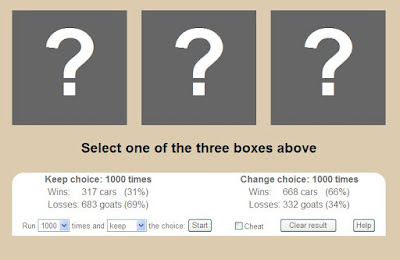