My first professionalish writing gig was in college. I had wanted to write for my high school paper, but I never got around to it. After almost two years in college, I decided to respond to an ad in FSU's college newspaper, The FSView & Florida Flambeau, even though I didn't really read the newspaper. (Full Disclosure: I didn't read it after I started writing for it, either. Only when I started editing the section, and then I only ever read the stories I had to edit.)

The recruitment ad, placed by Matthew Gilmour, called for Arts & Entertainment writers, and I was going to nearly every concert I could at that time, so I sent in a sample review for The Feature's Exhibit A (a fine album) and was on my way.

My two-year stint at the 'View was pretty wild. There were a lot of great album releases and concerts to cover; we won a national award for editorial content; and the paper made news for itself when it became the first college newspaper purchased by a major corporation (Gannett Company, Inc.). This was possible because the FSView was an independent paper.

The original FSU paper, the Florida Flambeau, was a hardhitting, political, sometimes investigative-reporting type affair. Eventually, it upset The Order when it ran a negative piece about Greek Life (fraternities / sororities). As a result, the FSView was started up by Greek Sympathizers and soon got all the Greek advertising revenue. The 'View soon went deep into the red, and the Flambeau made a deal to acquire it.

Thereafter, the 'View and the Flambeau were "one," serving the FSU campus at large, but being financially independent from university money. Which, you think, would allow them some liberties in terms of, uhh, reporting / being critical of University Affairs, but no such liberties were achieved. When I was there, the two-page spread of Entertainment (read: bars / nightclubs) ads reigned supreme, sometimes knocking my section down to one page of editorial content and two pages of ads.

Read more history here, or on Wikipedia (an entry that I wrote and got approved by the Wiki Powers That Be).

Despite all the turmoil, I thoroughly enjoyed my time at the paper and I learned a fair amount. One of the best lessons I learned is that reaching out to your co-workers (asking them how your job impacts their job and vice versa) is quite helpful if you care about doing your job right. (Note: a lot of people there, from lowly writers all the way up to the newspaper owner did not in fact care about doing their jobs right.)

Anyway, when I left the paper, I had over 100 articles posted online. About a year later, they decided to overhaul their website, and, unsurprisingly, this wiped out their online records. Luckily, I took care to get every printed issue from my time there before I left. But the downside now is that without a massive scanning project on my part, there is no way to share these articles with the general public.

That was never published.

Here is my response to a brutally dimwitted op-ed that my then editor-in-chief ran one week:

That's all for now, folks.
Posted by Justin DLC at 3:19 PM No comments:

For the past couple of weeks, I've been working on updating my personal website. It's been a fun thing and I've gotten into the feverishly detailed state of mind that comes with semi-intricate web development. 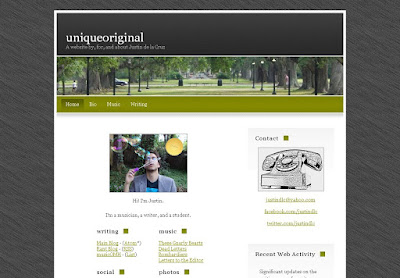 I soon realized that I had a lot to say about myself (surprise, surprise), so, rather than cluttering up my website pages with tons of prose, I've decided to post longer blog posts here and then simply link to the them from the site. So that's why you'll soon see my thoughts on writing, music, maybe some other things on this blog.

Let me know if you have any suggestions for what to put on my site. I'm planning on adding pages for "my favorite things" (movies, music, books, websites), "miscellany," and other things, maybe.
Posted by Justin DLC at 2:58 PM No comments:

Growing up, I didn't write anything outside of school. But my first writing success was having a blunt story of mine ("The Underground Kingdom," a scan of which will be produced as soon as I find the story from my closet) featured at a young writer's festival when I was in 5th grade. It was the tale of a kidnapped princess, a king who has lost his wits, and an underdog hero. At the end of the story, I even wrote "MORAL: Never underestimate the small guy" or some equally Mother Goose-type thing.

In middle school, I was blessed with my first great English teacher, Mrs. Julia Bradford (Roach) Roach (she had married a man with the same last name as hers, but, which she stressed, a man to whom she — and she had taken care to research this — was not related). We wrote a short story every week in order to incorporate new vocabulary words into our writing. I forget most of what I wrote. One was about a space alien / starship. I remember that an acquaintance of mine at the time, Artus Nemati, wrote a powerful series of short stories about dirt. (Or was it dust?)

Mrs. Roach had drilled us on participles, gerunds, and other high-level grammar that is all but left out of the classroom nowadays. I beefed up on this stuff when I began to study Latin in high school. But I honed my analytical writing in the classroom of Mr. William "Carter" Hammond, my high school's resident AP English (Lang/Lit) teacher, where, for every Friday during the my junior and senior years, for precisely 55 minutes, my pen furiously hit paper in an attempt to express my views on the imagery in "Blackberry Picking or the symbolism in "The Destructors" in a concise-but-non-formulaic in-class essay.

Later, I came to blame this exercise for my hyperdeveloped ability to write quickly and expertly underfire — in college, papers would 90% of the time be left off until the night before (even 18-pagers, if you can believe it) — but I soon came to the conclusion that I was simply putting off work as a defensive mechanism so that later, no matter what the grade, I could say to myself, "Well, I didn't have a lot of time to polish that one."

In college, I began blogging and I also began writing music journalism, first for FSU's student paper, and later, after graduation, for musicOMH.com. It's a neat process to sit down with new music and try to say something about it that isn't vague, hackneyed, or reductive. It's also very challenging.

In grad school I discovered my love of the personal essay. It's an amorphous, fractured beast that allows for all kinds of tangential asides and non sequiturs (when done right, of course) and doesn't necessarily articulate a well-formulated worldview or moral or lesson in the way an argumentative essay, op-ed piece, or research article does. I'd tried my clumsy hand at short fiction before (and had attempted NaNoWriMo on two separate occasions), but I found it much easier for me to write out personal essays than to write fiction.

See, instead of writing thinly veiled autobiography-as-fiction, I could start from the essential truthiness granted to the personal essay form and start to smudge the truth from that side. That is to say: because of a need to craft the presentation of information into an entertaining prose and/or linear narrative (via omission, conflation, and minor fibbing), all essayists are essentially liars, but certainly not as big of liars as fiction writers are.

Just saw your site and thought I'd tell you how great it is. It takes a lot of courage to attack people on a website, and I'm glad there are still cynical dudes around who uphold some form of justice on the internet. Who are music critics to criticize music?

An album takes a whole lot of work, and just because it doesn't add to any sort of artistic realm (or make any sort of artistic statement, or hold any sort of aesthetic value) in the eyes of the reviewer doesn't mean it should be denigrated publicly. Bad albums have feelings too, man. Anyway, since you're out of the game of doing actual music reviews (Pitchfork reject your application one too many times?), I thought I'd offer up my harsh reviews for your site's consideration.

Actually, I'm pretty much out of the game of music reviewing, too (the stress of evaluating something fairly, without resorting to ad hominem attacks, was just too much for me), but feel free to check out my wares and see if any of them are hateful enough for you to hate on. You can find a full list on my website --- www.justindelacruz.com --- along with more than enough personal information to serve as fodder for your review of my reviews. (You might start with how noncompliant my website is re: W3 standards. I know, I know. I'm working on it. Sorry, but not everyone has the time to set up a shitty Wordpress template. And I know "uniqueoriginal" might be a little too indie-ironic for you [not to mention the bubbles picture, for crissake!], but not everyone can pick a flaccid tongue-in-chic ripoff website name, either.)

So where was I? Lost my train of thought there (something to consider if you decide to rip one of my reviews).

I was going to say that if you need any more personal details about me so you can more effectively rip my writing, please feel free to ask.

Do you need to actually listen to the albums I reviewed, too, or are my narcissistic tendencies, meta ironies, and bad puns enough to make up the bulk of your rip?

I think you're best left unknown.

Yesterday, Jessi called me out for listing "Moderate" as my political view on Facebook. I had listed that because I do not entirely align myself with either of the two national parties in the U.S., but I agree with her sentiment that it's fairly obvious that I lean in one direction more than the other.

So I'm going to start fighting political apathy and say that (according to this website, at least) I'm a non-interventionist / cultural liberal / left social libertarian.

My Political Views
I am a left social libertarian
Left: 5.65, Libertarian: 4.95

Of course, this quiz is not the sole determiner of my political views. I also find myself agreeing with many aspects of social progressivism. But, I suppose I'll have to keep reading around to pin down what sort of political and social views I agree with the most.
Posted by Justin DLC at 9:35 AM No comments: