One night not too long ago, my friend Matt asked everyone what they would have liked to study in college. You know, if you had to go back, and you couldn't pick the same major. I said mechanical engineering. I don't know. I figured I could have learned something hands-on, where you can plan things, implement things, change things, and see the results. Then, he said if I had time to kill sometime, I should look up this game, Fantastic Contraption. 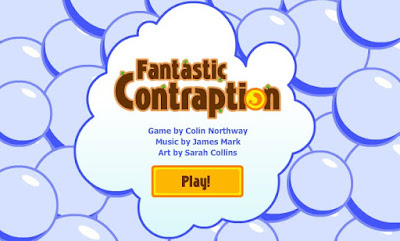 The first time I found the game, I poked around for a minute or two, then moved onto something else. But when Jessi mentioned that she had been having fun with the game, I decided to give it another shot.

Whoa. This stuff is intense.

Okay, so for each Fantastic Contraption map you have this piece, right? It's usually a ball, but sometimes it's a square or rectangle. It resides in (or near) a rectangular patch of light blue. Here are some different looking starting pieces:

Your mission, should you chose to accept it, is to use a combination of spinning wheels and rods to move the starting piece from the blue rectangular patch to the pink rectangular patch on the map. Here are your tools:

*Yellow wheels spin clockwise, and you will use these a damn lot (since many of the pink patches are to the right of the blue patches).

*Pink wheels spin counterclockwise, and you will use these... not so much.

*Blue wheels do not actively turn either way, but they will rotate with the flow of things if there's motion involved. (Wheels must have a rod attached to their center notch in order to spin...)

*Water rods (blue) are joints that can pass through other wheels and rods and starting pieces, but not through the environment, which includes the green land and the orange balls and other obstacles used on some maps. They're also more flexible, allowing pieces connected to them to jostle around a little bit. Although they can pass through things, they still weigh something.

*Wood rods (brown) are joints that hold firm and weigh a good amount.

The following are screenshots from a map called "Awash." 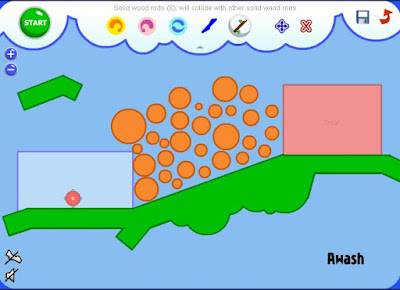 The blue section doesn't always necessarily contain the piece in question. The blue patch is simply the only area where you may place wheels or joints. Like this: 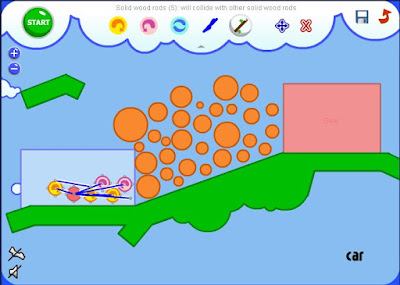 So you build your Fantastic little creature, and then you set it off to carry / propel / encourage your starting piece to make its journey across the map, like so: 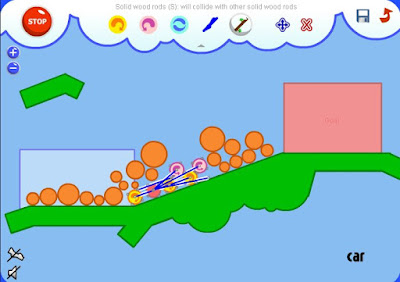 You don't have to get anything except the piece in question into the pink patch. The piece does not have to be connected to anything, and nothing else has to pass through the pink patch. Once your piece hits the pink, you get a victory cloud: 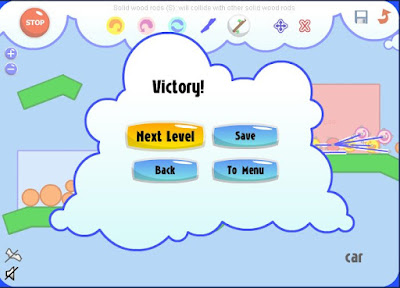 What seems fairly simple and easy in the first few maps soon proves very difficult. ("Awash" was one of the hardest maps for me. My first successful design blocked all the orange balls and had a little car that drove the piece across the top of them.) You develop one way of approaching things, and then you realize a certain map won't allow you to work that way. One of the greatest parts of the game is self-discovery, so if it seems like an appealing game to you now, I'd encourage you to stop reading and to start playing. Seriously. It sort of ruins it when you see a simple solution that you could have come to after a bit of work. I know. I've done it.

The other great part to the game is that you can save your contraptions to share with others. Games are fun and all, but bragging rights are excellent.

It took a few days of intensive play for me to pass all the levels, and then I gave it a break. And then I decided to go back and try to use as few moving pieces as possible. So for all of you who are not keen on playing yourself, now I'm going to list all my solutions, along with the number of pieces I used and whether the idea for the solution was stolen from other players' contraptions (which you can view for each map after you've beaten that map). Oh, and I'll list a few tips / surprises / discoveries I had whilst playing.

*Gravity is an important factor.

*Weight is a crucial factor. Always factor your starting piece's weight into the design of a contraption from the start.

*At least a rudimentary knowledge of catapult design is essential.

*The game has a few prominent glitches (none of which I employ in my solutions here). One minor glitch is when pieces unexpectedly pass through other pieces (such as water rods through the environment) when they really shouldn't.

*You can attach spinning wheels directly onto some of your starting pieces without rods, which can cut down on your total number of pieces dramatically.

*Break down the map into separate elements (that may or may not require separate contraptions).

*One way to get as few pieces as possible is to make your contraption normally and then cut away the fat (redundant pieces).

Okay, on to my final designs. I'm quite proud of them. (I'm less proud of the ones where I stole the idea.) (I suppose now I could devise arbitrary challenges, like "no wheels," or "no wood" or "the piece must pass through ____ once before finishing the map." ... the fun never ends!)

(The only thing is that you have to wait through some ads to watch each solution, so if you only want to see one or two, I'd suggest checking out 15 or 19.)