Summers have become synonymous with reading for me. I think it was a combination of factors:

Another reason that summer equals reading for me is that American society has partly encouraged this association. Summer's for lazing about in a hammock and reading a novel.

There's a particular Calvin and Hobbes strip (that I couldn't dig up on the Internet; I should catalog all of them and quote them like scriptures) where Calvin's talking about how it's summer and how his dad likes to get a good hardback and sit out under a tree to read it. (I don't remember the punchline. I think Calvin says his dad likes to buy the book with cash so they can't trace his purchases...)

There's another comic strip reference that will allow me to transition nicely into what is supposed to be the meat of this post. I haven't read much Bloom County, but one time I bought a short "Best Of" collection in the bargain bin at Barnes & Noble. Opus (the main character of the strip, a penguin) loves To Kill A Mockingbird and rereads it every summer, and I think in this particular strip, he is addressing the book's author, Harper Lee. Maybe appealing to her to write again. (I don't remember. I'll have to seek out that strip, which is also unlocatable online.)

I saw the movie when I was younger and I've always heard good things about the book, but I never got around to reading it. So when I stopped into our local Goodwill used bookstore a couple months ago and saw a paperback copy available for $0.99, I couldn't pass it up.

I spent most of May and June this summer in a class on Ernest Hemingway, reading some of his short stories and novels for the first time. I was glad to have read them, but it started to cast a real gloom over things. A couple days after the class ended, I went looking for something to read. I have dozens of books I haven't read yet, but for some reason I was drawn to Mockingbird, and I must say that it's a damn fine followup to the doom-and-gloom depression that comes with overexposure to Hemingway. 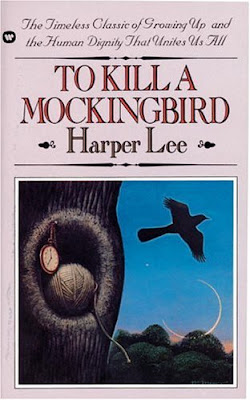 It took me a few pages to get into the rhythm of (Nelle) Harper Lee's narrative, but when I got there, I was there for the long haul. One of the pull quotes in the front of the paperback (from a review in the Minneapolis Tribune) says "The reader will find . . . a desire, on finishing it, to start again on page one." Damn tootin'. When I got to the end and realized it left off at the incident where the story began, I went back and reread the first page, and had to stop myself from going on.

To Kill A Mockingbird is a refreshing tale of humanity as seen through the eyes of one Jean Louise "Scout" Finch, told simultaneously from her vantage points of (1) looking back on the incidents of her childhood (in consultation/collaboration with her older brother, Jem) when "enough years had gone by to enable [her/them] to look back on them" and (2) as a young girl (of 7~8 years old) during the times of those incidents. This is a clever device that allows the reader access to the unabashed innocence and ignorance of childhood mixed with an older type of wisdom that comes through at certain parts in the narrative. (Hmm... much like Calvin and Hobbes, now that I think about it.)

Scout, Jem, and Dill banging about the neighborhood — deathly afraid at times, surprisingly courageously otherwise — made me (in my third year of "adult life," with my first "real job" out of college) yearn for childhood again, and regret not spending more time outdoors as a kid, putting on plays, scaring each other, etc. (Though I did my share of bike riding, I suppose.)

But the larger theme of the book — treating people equally, placing yourself in other people's shoes — had just as big an impact on me. I'll admit, for example, that I was especially touched after the trial, when Atticus received all that food from the neighborhood. I hate to be idealist (Atticus has a great speach on his "idealism"), but it seems to me that if everyone read this book (and taught this book, if they couldn't properly comprehend it), a lot of people (but not everyone) would think a little bit more about what they do, and maybe even change some things they do in regards to their behavior and actions towards other human beings.

The irony in my belief, then, is that the book has been met with a great deal of opposition.

"The book's racial slurs, profanity, and frank discussion of rape have led people to challenge its appropriateness in libraries and classrooms across the United States." (Wiki)

Wikipedia tells me it's been opposed in the '60s for its discussion of rape, and for Mayella Ewell's attraction to Tom Robinson; in the '70s for not being harsh enough on the racism present throughout. But, I'd have to agree with Ms. Lee's written defense of such accusations, excerpted here in a letter she wrote in 1966:

Recently I have received echoes down this way of the Hanover County School Board’s activities, and what I’ve heard makes me wonder if any of its members can read.

Surely it is plain to the simplest intelligence that “To Kill a Mockingbird” spells out in words of seldom more than two syllables a code of honor and conduct, Christian in its ethic, that is the heritage of all Southerners. To hear that the novel is “immoral” has made me count the years between now and 1984, for I have yet to come across a better example of doublethink.

I feel, however, that the problem is one of illiteracy, not Marxism. Therefore I enclose a small contribution to the Beadle Bumble Fund that I hope will be used to enroll the Hanover County School Board in any first grade of its choice.

I don't know much what else to say, except that if you haven't read it, this book is definitely worth the time. It's an easy read, and it's constructed in such a way that if you need to remember a detail from earlier, the narrator subtly reintroduces the detail in case you'd forgotten (but never in an annoyingly obvious way). I suppose I'll close with one of my favorite comments in the book. After the trial, as the kids try to get past the bullshit the adults in town set out, Dill (who is apparently modeled after a young Truman Capote, Harper Lee's childhood acquaintance) comes out with...

"I think I'll be a clown when I get grown," said Dill.

Jem and I stopped in our tracks.

"Yes sir, a clown," he said. "There ain't one thing in this world I can do about folks except laugh, so I'm gonna join the circus and laugh my head off."

"You got it backwards, Dill," said Jem. "Clowns are sad, it's folks that laugh at them."

"Well I'm gonna be a new kind of clown. I'm gonna stand in the middle of the ring and laugh at the folks. Just looka yonder," he pointed. "Every one of 'em oughta be ridin' broomsticks. Aunt Rachel already does."