Living in a house in the woods

What better way to spend a rainy Sunday afternoon than listening to Wilco and blogging? I put Sky Blue Sky on the old compact disc player while I was cleaning up earlier this afternoon, but I've moved into the dreamy terrain of Yankee Hotel Foxtrot as the rain flutters through the leaves out here and as I try to organize some thoughts on living in the woods. 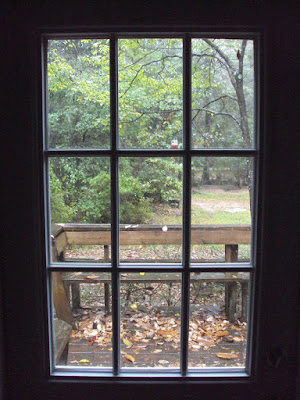 Oh, I didn't mention that we're living out in the woods? Well, we are. And that's the view to my immediate right in the front office space here. You see, over the summer someone at work wondered if there was anyone available to housesit from August to December. Conveniently, the lease on our (overpriced?) duplex was ending in August, so Jessica and I jumped at the opportunity to housesit: save some money, take care of some dogs, live in the woods.

So now we're about 30 minutes outside of Tallahassee (yes, I am allowed to use driving time as a measure of distance). It's not too bad, though, because at least the roads are paved out here and there are maybe a dozen houses on this street. It was difficult getting adjusted at first: the nights are real quiet, it gets real dark (paved roads, but alas no streetlights), and it's standard operating procedure out here to let your dogs roam around. Which inevitably means midnight barking / howling sessions. Oh yeah, and for some reason the owners of this house are big fans of large windows, but not big fans of curtains. Suffice to say, waking up to dogs going crazy at 2 a.m. and looking out from huge, curtainless windows at the tiny patch of visible woods that are illuminated by a couple of lamp posts is not something I was used to. Scenes from a dozen horror movies flashed through my head.

A 30-minute drive means waking up a little after 6 a.m. for my 8 a.m. job and getting home a little bit before 6 p.m. It means planning ahead for errands (because driving 2 hours a day is not my idea of a good time), rushing home to sign on to my 6 p.m. online classes (Tuesdays & Thursdays), and generally just long-ass days. The toll all of that takes is washed out by the peace that comes with living out here. There aren't any damn college kids out here blasting their Young Jeezy. There aren't any traffic sounds, car engines starting up, car doors slamming, sirens going off. Pretty much just the dogs and the wind and the thunder when it comes.

Jessica pointed out that the woods are cooler: no buildings and pavement holding in heat, no cars and buses spewing exhaust. It's getting cooler now, but a few weeks ago there was a noticeable difference of a few degrees between here and the city. Of course, these environs also hold more wildlife than the city. We've had a handful of deer sightings; one morning on my drive to work I saw 6 deer in the neighbor's front lawn. But the insects are more intense here too: dusk is our favorite time of day, but the mosquitoes and other things buzzing around get pretty intense. Good thing there's a screen porch that's extremely book-reading friendly.

The setup here is pretty sweet: there are "his" and "her" offices on opposite sides of the house, so it's easy for Jessica and me to extricate ourselves (at times) so we can do our own thangs (her: writing, reading, fashioning outfits, dancing; me: writing, songwriting, sitting around). There are strong ceiling fans and overhead lights and lamps in every room. Big desks. It's great.

At the moment we're in charge of 9 animals. We moved here with Jessica's two pet rats (Sadie & Lolly: I can't spell their full Christian names, so you'll have to go here if you're interested in that) and our little ginger cat, Simon (Anthony Purrkins; a.k.a. Simey, Mr Whiskers, Chairman Meow, Agent Orange, et al.). The house came with two dogs, Doolin & Bear, mixed breeds, one large and black, the other somewhat squat and black. Then, one of the neighbors here asked us if we could drop in and feed their four dogs when they went out of town. We agreed because who doesn't love dogs and helping people out? Plus they helped us out with Doolin & Bear when we had to go away one weekend. Plus one of their dogs is named Lolita. (Awesome.)

Simon has had the roughest time. Jessica thinks he sees and hears and smells things all around and that's why he scurries about and meows constantly. I just think he's needy. Either way, when he's not passed out on the top of the couch, he's scratching cardboard, running about, or meowing. He has settled in a bit, though: 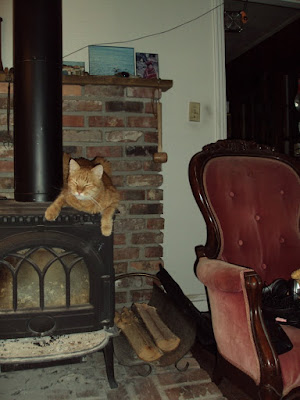 And that, in a nutshell, is what it's like living in the woods. Oh yeah and they have a stickshift car they asked me to drive around and I don't know stickshift but I can drive it well enough sometimes and there's poor tv reception out here and no cable so we signed up for Netflix and we're hooked on it and I got an iPod Touch but I just returned it so I could buy the "new" iPod Touch, &c.
Posted by Justin DLC at 2:42 PM