The week before Christmas 2010 I was the only person in my workplace. Everyone else had taken time off, so my goal was to watch as much Arrested Development as I could (via Netflix streaming).

I'd never seen it before.

I only made it through Season 1.

But I snapped some awkward screenshots along the way. 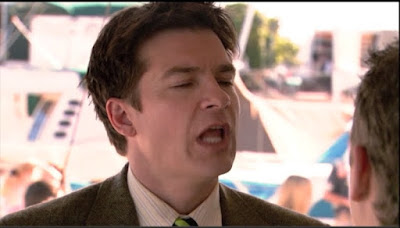 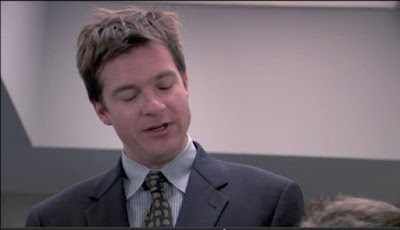 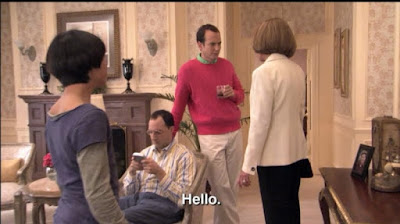 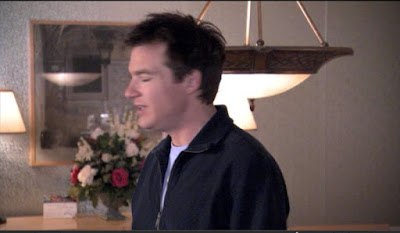 Posted by Justin DLC at 4:32 PM No comments:

There's a wrong listing of a phone number that appears on the Google Search page, but appears correctly when you click over to the Google business Place page. Any ideas on how to correct this, or will it auto-correct when Google gets newer search caches?

The result is that someone in my department is getting all these calls intended for the university's student health center. (Other Google Place pages for FSU institutions are also listing this phone number incorrectly, presumably also on the Search pages.)

(Note: I've edited the Place page, sending a note that the phone number on the search page should be changed. Does that go to a Goog Admin?)

Pics and links (click pics to see them bigger): 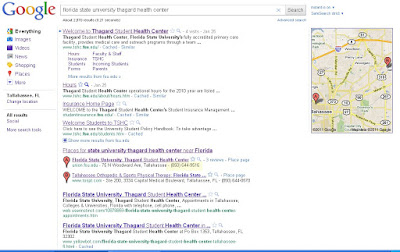 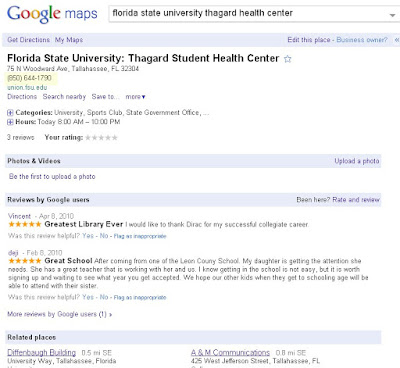 Printed out a book for someone.

Scanned a book for myself.

Got a little bit older.

And a little bit blinder.

(I'm waiting on a new pair of eyeglasses.)
Posted by Justin DLC at 4:53 PM No comments:

On Thursday, January 20, 2011, Scott held what was called a Twitter Town Hall, where the governor responded to questions from his constituents via the popular social media service Twitter. Questioners were told to direct their inquiries to Scott's Twitter account, @FLGovScott, and to use the hashtag #flgov. Scott would then retweet (re-post) the question and send a response. Scott responded to 22 questions during the Twitter Town Hall, but near the end of the session, he retweeted a question from Twitter user @PrettyTwister — "So what, are you gunna fire everyone and hire Walmart employees? Yeah, thats great... you jackass." — without answering it. This was an apparent mistake on the governor's part, since he ended the Twitter Town Hall five minutes later and deleted this re-posting from his Twitter page.
Posted by Justin DLC at 9:08 AM No comments:

Occasionally, I spend good amounts of time writing comments, emails, and other communications online that don't end up anywhere else. But just now I figured, if I'm going to do all this work, I might as well slap it into a quick blog post.

I've always wanted to blog stuff about Tallahassee's Hidden Spots. Too many times, I hear from people moving here from bigger cities complaining that TLH is pretty boring. I'll admit that it's no NYC in terms of nonstop things available, but if you start poking in different directions, you'll see that Tallahassee starts to give way into a deeper world of arts, parks, restaurants, and just plain old weird places.

Anyway, I found this blog today and wrote up a comment with suggestions on places that Tallahassee has to offer. So here's the short list (predicated on the notion that I will do a more robust list at a later [probably much, much later] date):

Ochlockonee River State Park – A bit of a drive, but worth it. Near Sopchoppy, beautiful.

St. George Island – A longer drive, but still worth it. Pristine white beaches.

Lake Talquin State Park – Big lake, but this is the best spot to view it from what I’ve seen so far.

Hamaknockers BBQ – Best BBQ I’ve had around these parts.

Silver Lake – There’s also a chain of lakes out here linked by dirt roads. Good for stargazing because there’s no light pollution out there.

Five years ago I would have added Sunland (an abandoned children’s hospital), Vinyl Fever (THE record shop), and Rice Bowl (an awesome Thai / Chinese / Japanese restaurant) but all those places have gone away.
Posted by Justin DLC at 4:36 PM 1 comment:

I got an iPod Touch! Did I say that on here yet? Jessica done bought it for me for Christmas 2010! The inscription reads:

[REDACTED, IN CASE I NEED TO STATE THE INSCRIPTION IN THE FUTURE IN ORDER TO IDENTIFY THE IPOD IN CASE OF ANY FUTURE THIEVERY. NICE TRY, GUYS]

I'm sitting in one of my online classes.

The professor described the scientific method, replete with flow charts and custom highlighting.

I am trying to blog more in the new year.

I started counting calories on my iPod Touch (I will spell that out every time; I do not like the word blend / elision "iTouch") via the My Fitness Pal app... (Too lazy to link, still.)

...which shows that JUST ABOUT EVERYTHING is fun when done on a touch screen.