Radiohead - The King of Limbs (Play by Play)

Radiohead surprised everyone last Monday (Valentine's Day) by saying that their album would be available in 5 days' time. They really meant 4 days' time. If you've pre-ordered the album, go here to login and download it. If you haven't and don't plan on buying it, enjoy this video:


And here are my impressions upon first hearing the album... 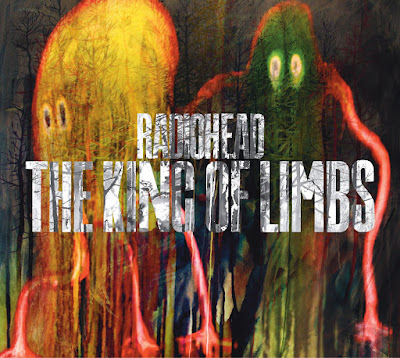 Bloom? In Bloom? Nirvana? Some scattered frantic beats reminiscent of Amnesiac. When Yorke starts singing, it starts to remind me of his solo disc, The Eraser. I left my cord at home — can't load this album on my iPod. Dammit. [Musical interlude, swells, standard dramatic stuff.] I'm thinking I shouldn't even try to parse words during the first listen. I think he's saying "I'm moving out..." Is this about when he moved out of his parents' house? Bloom?

Not a particularly strong opening track.

Hope the second one grabs me like "Bodysnatchers" did before.

Morning Mr Magpie ... more schizo beats. Did I just drop 50 bucks on The Eraser 2? Gimme at least one bangin' track here, guys. Throw Jonny on a solo or something. I can appreciate their need to not make In Rainbows 2, but, uhh... There's nothing like several seconds of silence at the end of a track... I paid for this silence... but it's not the thoughtful silence at the end of Kid A... it's the annoying silence.

Little By Little shows more promise straight out of the gate. Still got an electronic beat feel, but it's got a bit of ummph to it. And some weird castanets thing going on. And a mechanically droning bassline, and backwards guitar. I can dig it. [Thank god for Blogger's auto-save feature. I just accidentally closed the blog tab! Talk about suspense...] Why have I never noticed that Yorke's singing has been more and more like Enya. Or Mira (for you Tallahassee local band buffs). What's up with that? Primal vowel sounds. No idea what he's saying. Little By Little just went into a weird lurching slump-thump. Yeah, I can bump to this one.

Aaannd Feral sounds pretty much like the first two tracks here in the first minute. If I wanted some looped beats, I'd go to an ecstasy-laden rave at Club Rayn or wherever. Or I'd go listen to Kid A and Amnesiac again. I mean: I get it. Trance-like. Get in the zone. What a fucking waste of a track.

Lotus Flower: Not that art should be judged on how long it takes (otherwise Chinese Democracy would be the best album of all time, amirite?), but I seriously wonder how long it took them to cobble together these beats. I can recognize that Yorke's default now is electronica and I'm sure he rocks back and forth listening to these tracks and fucking chills the fuck out. And, I mean it sounds good. He just did a reverberated delay on his vocals. So. You know, if you're looking to mess around with technology that has been around for quite a number of years, check out the new Radiohead. Ok... it's not that bad. I guess I just need to digest this.

On a side note, I can't remember how long it's been since I've listened to Hail to the Thief. I thought that one was the bee's knees when I first got it. I listened to it quite a bit. Then it kind of fell by the wayside. Kid A has been a good go-to. And I played the hell out of In Rainbows. And then there's the back catalog, I mean... oh, new track started.

Codex has got some light piano. "Videotape"-type piano, but... not as good? Srsly, though, did Radiohead even listen to their older songs? Maybe they just forgot what they recorded before. Codex is like half over now and "Videotape" beats the shit out of it. At this point, I'd rather they take some risks and have it fail than do stuff like this. What if Radiohead did a straight-up pop album? I saw them cover "The Headmaster Ritual" — it'd be great if they went all straight 4/4, synth, bubblegum pop on us. They could do it well, I think... Lemme guess. Another 30 seconds of silence at the end of this track now. Mm-hmm.

I'm hoping there's some really good artwork with the package that gets mailed to me. Because I'm on Give Up The Ghost and I'm kind of ready to strike this album from Radiohead's discography. Can we pretend it didn't happen? Can we go back to when you guys said you wouldn't make albums anymore because it's a single-track download culture now? Because then you could have just released Little By Little and be done with it.

I'm also slightly embarrassed that this material is entirely workplace-friendly. When I play hip-hop at the office, I feel like a fucking badass. When I play this... I could play Give Up The Ghost at a nursing home and it might go over well. But somehow I expect that there will be above-average reviews for this album. The world needs Radiohead, and every new review is a chance to grab a new person and show them that Radiohead has a wonderful catalog, despite having a few missteps. (15 MisSteps? lulz.) I think this track is wrapping up, though, so I get to start a new paragraph.

Separator is at least named in an In Rainbows vein. (You know, like "Reckoner," which is a great song name, I think.) Let's see how it comes out........ Ok. I guess I need drugs for this... "Every woman... does a goblin?" What is he saying here? I can't understand it. I feel like a cranky old man. Like, for example, this percussion loop. I could easily create this in less than five minutes. Where's Phil Selway? I'm thinking if anyone quits, it's him.

I expected more.
Posted by Justin DLC at 9:33 AM