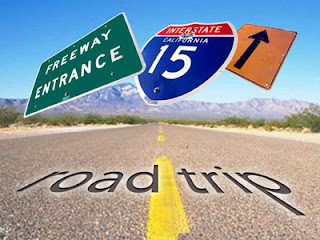 (The second result for a Google Image Search of "road trip.")

I spent this past (and my last) academic year in Italy. When it came time to leave, I realized it would take me a while to find a job. And I realized that all my friends and family were spread out across the USA. And that I hadn't seen them for at least one year (in some cases many more). I moved back in with my parents in Melbourne, FL where I grew up, and I started thinking about heading north.

While applying to jobs, I began checking in with friends and noticed that many of them formed a giant hook across the eastern US. From Melbourne on the east coast of central Florida, up to Tallahassee in the panhandle, Atlanta at the top of Georgia, Nashville above that, Cincinnati to the northeast in southern Ohio, Chicago to the northwest, Amherst eastward into northern Ohio, then northeast to upstate New York, down to New York City, and finally in Baltimore. Each location was just about a day's drive (all fewer than 9 hours) from the next. The only black hole was the southeastern USA, from Baltimore down to Florida.

I tend to think of myself as an easy and lightweight traveler. Many times in Europe I would board a plane with just a backpack for a week's vacation somewhere (to save money, but also to simply travel light, to not have to worry about moving a lot of stuff). I would stay at cheap, crowded hostels. So I'm not generally concerned with where I roost, or about the facilities I'll have access to, or stuff like that.

Since I'm unemployed I'm immensely flexible. I wouldn't have to plan for myself (I can go wherever whenever), but I'd have to plan around my hosts' schedules. Coincidentally, things decided to work themselves out during the month of September, which buffers the dreadful summer heat and the worrisome winter chills. (Florida driver here: I've only driven in icy conditions once, briefly.) I would stay with my friends (who are in various stages of university or professional development) on weekends and with family during weekdays.

But because of various factors (one being home football games in Tallahassee, which I'd like to avoid if possible because of the intense crowds and general chaos in the city), I ultimately decided to reverse the hook — head straight from Florida up to Baltimore, knocking out the longest stretch first, when I'd be fresh and invigorated at the start of the road trip. Thus (bookended by "Melbourne, FL — Incalculable Amount Of Time"):

(If you view this zoomed out it kind of looks like a giant "thumbs down" ...)

So I'm about 90% planned out, but allowing for a little leeway. Weekends are prized times for visits, but unfortunately there are a heck of a lot more weekdays than there are weekend days (let's work on that, America; I know we can do better).

And I haven't planned anything outside of the dates and cities. I'm not searching out landmarks or events, not getting tickets for things, not really worrying about What To Do When I'm There. I'd prefer, actually, to simply see my friends, see what they do on a regular basis, and feel things out. It's always easy to ask locals questions — Is there a good diner around here? Anything fun to do in these parts? And I recently got my first smartphone with GPS (which works even when I lose cell phone reception, yay!), so I'm set on directions.

Not sure how much I'll be able to blog, but I'll try. (Social media aside: So far I've barely been able to have the patience to take the time to Instagram all the photos I'm snapping. I don't like uploading right after I snap one because I'm usually on the move. So I batch upload like 20 at a time, and deciding on crops and filters and captions ain't easy, son.) I'm sort of treating this as a vacation, but I still plan on continuing to apply to jobs.

Is there any one thing I should do during the trip? Yell something from the window of my car? Ask people what they love about living in America? I don't know. Maybe I'll find out.
Posted by Justin DLC at 12:59 PM 3 comments: