One of my favorite songwriters/musicians/performers played in Orlando last night. I've seen David Bazan perform with his former band, Pedro The Lion, acoustic solo, electric solo (opening for Spoon), with his electronic-influenced band Headphones, and with his new backing band as a solo act.

He's one who likes to vary melodies and do slight variations on arrangements from time to time. But for the re-release of the Pedro The Lion vinyls (remastered), he decided to launch a tour where he'd play through one entire album, Control. Why that album? He's also known for taking questions during shows, and he answered this one for us: that was the only album he could stand playing all the songs off of.

One of his main "turns" (and a talking point in interviews / press releases) is Bazan's fallout from hardcore Christianity into agnosticism. He's open with it, he wrote an entire album about it, and he dismisses earlier songs he'd written for being closeminded and dogmatic. 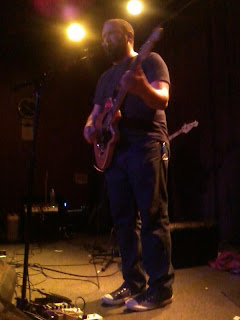 FIRST HALF OF Control

SECOND HALF OF Control