Some of the hard-hitting realities that I think have landed in my transition from adolescence to, let's say, "young adulthood," and then to adulthood have been:

Another lesson I would add that has been coalescing for years through various stages that can only be seen in retrospect but came to a head after a couple of weeks at a research institute with strangers who became acquaintances and then associates and then friendly associates and then some of whom became "friends" (to use a strongly loaded term that seems to exclude the majority of strangers I met from that "friend" category but doesn't really mean to exclude them):


Part of the reason for this last one fits into Physical Limitations.

But the point hits home when I think about how intimacy is marketed or structured in our (American) society. It seems like intimacy is a pretty big door. Maybe there's even a moat around it and a drawbridge in front of the door. But there's this pretty big door that stays closed pretty much all of the time. And then when you happen to find people you connect to, you open the door slightly and peak out and see what they look like in the sunlight. If they're amicable and don't really rub you the wrong way, you step outside and close the door firmly behind you.

Then you and this person kind of shoot the breeze. Take a walk around the lawn. Pick up a few stones and chuck them into the moat. After a while you realize that this person would be really interested in the artwork you have hanging inside your house, and you invite them in, into the lobby, cautiously, and the pretty big door closes behind you two and then you stroll around your house, still kinda cautiously, and show them your displayed artwork and share a coffee and ask about their house and they say "Oh, for sure, you should totally come over sometime!"

Depending on how they react to your lobby artwork, you might show them around to your kitchen or even into your basement and attic, where the real stuff is stored.

Or, if it's a certain kind of connection, you lead them into the master bedroom.

But this model doesn't seem to reflect real life. We're a pretty transient society now, and I don't have to go look up statistics to know that people are moving all around for different reasons: for friends, partners, family, work, out of boredom or frustration.

At the end of middle school my good friend Matt asked me to sign his yearbook. I wrote a short entry that focused on an inside joke that we had just created and I distinctly remember Matt saying, "We're probably never going to see each other again, and that's what you write in my yearbook?" I shrugged my shoulders and laughed it off because I was 14 and I didn't really know what he was talking about. (How did he know what he was talking about?) But he was right — I haven't seen him since. (I still don't really regret writing down the joke, though. *shrug*)

During high school, I remember another friend, a different Matt, who mused aloud when his parents were driving us around somewhere — "How do adults make friends?" — and his parents assuaged our introverted fears by saying that it was pretty easy to meet people at work or something. Then, during a summer after high school, I bumped into a few people I knew but whom I wasn't close friends with. I wondered aloud, guiltily, to Matt — "What am I supposed to do with those people?" As in, where do they fit into the grand scheme of things? They seem nice enough. Maybe we just never had the right opportunity to hit it off.

Now after years in Tallahassee, FL, an intense year abroad in Florence, Italy, a couple years down in south Florida and coming back to my current home in Atlanta after a couple weeks in Los Angeles with strangers-turned-friends, I'm back in the same place again. What am I supposed to do with those people? The interesting, fun, intelligent people I had the great opportunity to meet?

The internet was supposed to be the great democratizer, but it's not, and social media is supposed to be the great friend retainer, but it's really not. If intimacy is our house, and that big front door is our filter, then social media is us cracking open the door long enough to chuck some fruit out to the other side of our moat, where the general populace of acquaintances sort of hang out in our garden when they're not busy in their own homes or chucking their own fruit.

(And we usually only ever chuck out the really good looking fruit, too, like how I posted to social media several pictures of a tiny, healthy kitten we found a few weeks ago in some bushes but didn't give everyone an update when the kitten tragically took a turn for the worse and ended up dying after the vet gave her some unnecessary medicine. [We don't go to that vet anymore.])

So maybe intimacy isn't really a big front door, but a revolving door. And whenever our friends get near enough, they cycle into our house and yell out from the foyer and we go down and meet them with a huge tray of fruit, some of which is unripe and inedible, some super ripe and delicious, and some old and rotting and gross fruit but they're fruit we have to carry around because we can't bear to throw them out, and then our friends stay for a while, chatting, checking out our fruit, and they're comfortable in our house and you don't even have to tell them where the bathroom is because they already know, and depending on how long they can bear to stay away from their own homes they stay with us and when we're done together they breeze out of the revolving door and we feel the vacuum of the house fluctuate as the air from the rotating door filters in and out.
Posted by Justin DLC at 12:56 PM 1 comment: Links to this post

I've been working on a redesign of my personal website based on a Bootstrap template that's HTML5... ish? I quickly got in over my head w/r/t CSS and JS, but I think I strung enough stuff together so that the website will work on most devices / browsers.

The goal was to have a site that was fully morphable from desktop to tablet to smartphone and I think I got what I wanted.

One project begets another, and as I redesigned I ended up starting a SoundCloud account, reconfiguring some blog stuff (including the title of this blog, taken from a David Bazan song, "Hard To Be"), and some other things that I already forget.

The work's not done, though, because I'd like to start an archive of sorts that shows the old designs of my website and also a Site Credits page (all of the elements of the webpage were openly sourced and/or creatively commoned).

Anyway, here's the thing (let me know if anything on it breaks when you're looking at it): 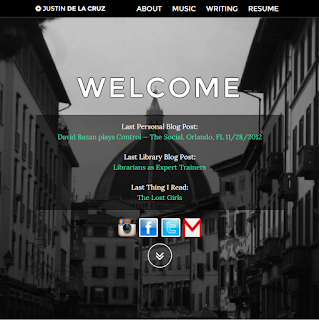 Posted by Justin DLC at 4:10 PM No comments: Links to this post